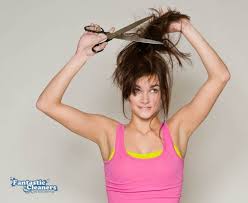 I have an appalling new haircut.

I’d injured my leg, so the long drive to my usual salon out of the question. But my hair was looking so long and drab I’d begun wearing a cap to cover it up. So I decided to duck into the “chop shop” at the local strip mall and get myself a quick cheap cut.

What could possibly go wrong?

My haircutter was an affable, upbeat, bright-eyed young thing.

“I want it shorter,“ I told her. “But not too short. Can you cut it so that it falls right below my ears?”

“You bet,” she said cheerfully.

She could. But she didn’t. The look I was going for was “short and chic.“ The look I ended up with was “Bozo the clown.“

The moment I was out the door I put my cap back on.

Years ago, my nephew got a haircut that was so abysmal — uneven, too short, and just weirdly off-putting – that when he got home he donned his Phillies cap and wore it nonstop till the ghastly cut grew out. Just once, when he was relaxing with a group of trusted pals, they persuaded him to take it off.

When he did, they burst out laughing.

I could continue to wear my own cap until my hair grew back. Instead I decided to take it off and see what happened. I’d been invited to my sister’s house for dinner. When she opened the door, she did a double take, then quickly said, “It’s not that bad.” All my brother-in-law could find to say was, “It’s short.“

Over the next few days, everyone noticed my catastrophic coif.

My friends had clearly chosen “It’ll grow back” as my new mantra.

Although both his parents assured me that it looked “very nice,“ the terrific five-year-old I baby sit for took one look at me and said, with refreshing honesty, “That’s ugly.”

The silver lining? Having a bad haircut has given me new insight into the people in my life. Some, I’ve learned, are blunt but honest: “Holy shit! What happened to you?”

Others are considerate, bold-faced liars: “Great haircut! You look terrific!”

The rest fall somewhere between: “Fabulous cut!” and “Gee, I hope you’re one of those people whose hair grows quickly.”

When he saw my new cut, Mark, the man in my life, gave me a hug and said “You’re gorgeous.”

That’s why he’s the man in my life.

It was my friend Deb whose response was the most instructive. She didn’t say a thing. When I finally prompted, “So how do you like my hair?” she looked at me for a moment, then said, “Is it different?“

I’d assumed that my appearance had been so transformed that just to look at me was a painful shock. And yet, it hadn’t even turned up on Deb’s radar.

So… maybe my awful haircut wasn’t such a big deal after all?

When I returned home, I took a good look in the mirror and thought, “Get over yourself, Roz. It’s only a haircut. It‘ll grow back.”

Then I took another look and put my cap back on.

(Roz Warren is the author of Our Bodies, Our Shelves: A Collection of Library Humor. )

10 thoughts on “The Bad Haircut Blues”