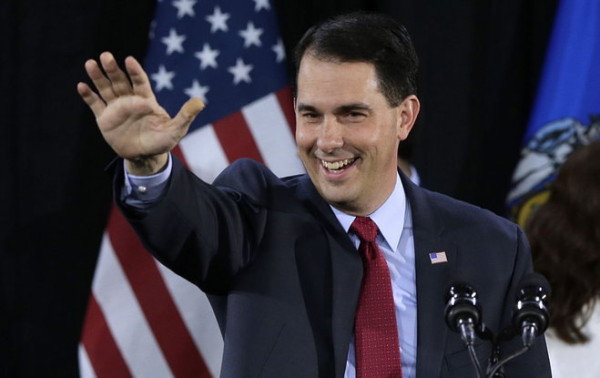 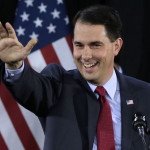 “Big pharma is going to squeal like a stuck pig, but I can wrestle those bloated lobbyists into submission just like I did with the unions,” Governor Scott Walker told This Reporter as we toured a factory in Milwaukee that had made tractor parts and now uses undocumented Mexican immigrants to manufacture chastity belts.

“If I’m elected President, this is how we’ll protect our daughters and wives from unwanted pregnancies, incest and rape,” said Walker, holding up what appeared to be a sanitary napkin and belt made out of steel. “Only the man of the house will hold the key.”

“Do you really think women will wear that contraption?” asked This Reporter. “It looks uncomfortable.”

“You ever hear a woman complain about wearing Jimmy Choos?  Those suckers hurt like hell,” said Walker, “Besides, we’ve updated the classic chastity belt for today’s modern woman.  Notice the soft flannel lining?  We offer a variety of styles for all occasions and they come with inspirational quotes. This is our most popular model.”

Walker held up a steel thong engraved, Thou shalt not tonight. “Isn’t that a pisser?” said Walker. “Here’s the best part.  Now that I chased the unions out of Wisconsin, we can knock these out for under seven bucks each, resulting in a savings of billions in healthcare costs.”

“Aren’t you concerned that by taking away birth control and a woman’s right to choose, you’ll be accused of turning back the clock to the 1950s?” asked This Reporter.

“Not at all. The 1950s were a Godless time.  Communism was rampant. So was fornication. Where do you think all those Baby Boomers came from?” said Walker. “The GOP has no desire to bring back the 1950s. What were aiming for is a return to the chivalry of the 16th century.  When a man’s home really was his castle, surrounded by a moat, and if anyone tried to destroy what he had worked so hard to build, they’d get a taste of boiling oil.”

Walker led This Reporter to the factory cafeteria where management dined on prime rib and strawberry cheesecake while workers ate cat food.  “Hungry men work harder,” said Walker. “You ever see a union laborer with a flat stomach? They all look like they are about to pop out quadruplets. When I’m in the White House, the unions will be history and I’ll bring the minimum wage down to two bucks. ”

“Aren’t you concerned that lowering minimum wage will hurt you in the polls?” asked This Reporter.

“It won’t hurt me with the deep pockets that decide the election,” said Walker. “There’s nothing they’d like to see more than a return to Free Market Principles and they’re women safe and secure in chastity belts.”

Walkers face turned the color of plasma.  “You want to know what medieval torture is?” he shouted. “Just visit Planned Parenthood!  They sell baby parts just like the Jews used Christian babies’ blood to make their Passover matzos.”

“Excuse me, Governor, Jews never did that,” said This Reporter.

“They didn’t, huh?” said Walker, scratching his chin. “Next thing, you’re going to tell me is that they didn’t poison the wells of Europe.”

Walker waited a beat, then socked me the arm. “Just joking,” he said. “I have a lot of Jewish friends.  They love me because I love Israel. When the End of Times comes, they’re all going to convert to Christianity or go straight to Hell.  They won’t have to wait long. If I’m elected, I’m going to beef up the defense budget and bring about Armageddon as soon as possible.”

Stacia Friedman is the founding editor of DailyLobotomy.com and the author of Tender is the Brisket.