Lent, the forty-day period before Easter Sunday, begins today.  This morning, children in Catholic grade schools all around the world will be getting The Talk.

The Talk is usually delivered by a nun, who informs kids that the forty days of Lent represent the forty days Jesus spent wandering in the desert while the Devil tempted him. “Because Jesus resisted temptation,” the nun says, “you kids ought to be able to give up something–Bobby Hohimer, spit out that gum!–for forty days.” 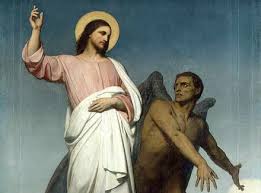 “Get thee behind me Satan.  I was in line first and I called NO CUTS!”

In the desert there is no dessert, however, so kids come to the conclusion that their suffering is greater than in Biblical times, when the Devil’s “temptation” was to challenge Jesus to demonstrate his supernatural powers.

Big deal. Call me sacrilegious, but challenging someone to demonstrate supernatural powers is chump change–what you do to kids who wear their superhero costumes around the neighborhood when it isn’t Halloween. 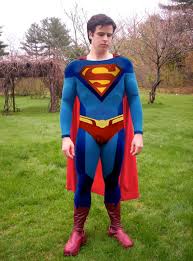 “Did somebody use green Kryptonite deodorant?  Because my powers ain’t workin’.”

Because the obligation of Lenten abstinence is based on Church dogma, it is only fair that children be able to use Jesuitical casuistry to avoid it. The Jesuits are a religious order who have historically avoided religious persecution by giving “Jesuitical” answers to the incriminating question “Are you a Catholic?” Jesuits are permitted to deflect this question by a sort of rhetorical ju-jitsu known as “changing the subject.” Answers approved by various Popes over the past 2015 years include the following:

“Am I a Catholic? You mean right now?”

“You have spinach between your teeth.”

“Have you considered applying to Notre Dame? It’s a wonderful school.”

No, the kids of America who give things up for Lent are the true saints, not the phony-baloney “martyrs” who were always getting torn apart by lions or impaled with spears. That isn’t a sacrifice, it’s just stupid; didn’t your mother tell you to be careful? 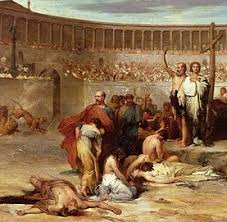 As someone who won the Catechism prize for three consecutive years in grade school, I offer to the youth of today this selection of things to give up for Lent which, while they may seem sacrifice-y, are actually not that hard to give up:

Lobster bisque: Lobster bisque is something grown-ups enjoy during periods of abstinence, when they’re not supposed to eat meat. Believe me, it’s not as good as a hamburger.

Water skiing: Because Lent bridges winter and spring, giving up water skiing isn’t that hard. If, like me, you were never able to stay up for more than five seconds, it’s a day at the beach, so to speak. 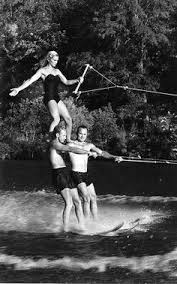 “What happened to your date?”

Asparagus: Asparagus is a vegetable, but you’ll never persuade your mother that giving up one of the five basic food groups is required by a papal bull. Pigs get fat and hogs get slaughtered, as the farmers say. Giving up a single stringy vegetable that you have previously masticated into a ball of green fiber, then pretended to choke on, is an achievable objective.

Choir: Unless they are castrated, most boys resist choir, choir practice, and wearing those sweet cassocks and surplices that choir boys are required to wear. God forbid you should ever have to walk out of church wearing that get-up when middle-school hoodlums are waiting to flick their cigarette butts at you. 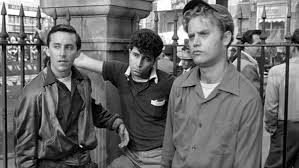 As a former Catechism champ, I can assure you that giving things up that you don’t really like for Lent is permitted by Catholic theology, and that you will not burn in Purgatory for doing so.

I offer it to you in the name of the Holy Trinity–Larry, Moe, and Curly.

7 thoughts on “What to Give Up For Lent”