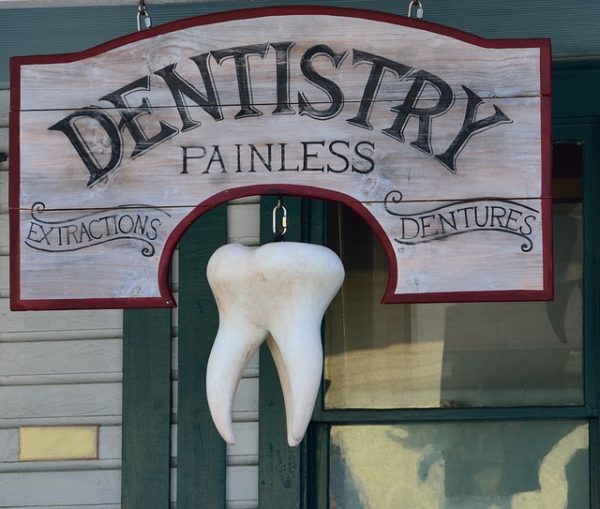 As you may know, the state of Maine is known as Vacationland (it says so on our license plates). So as we transition from summer (let’s eat lobster!) into fall (the leaf peepers will be here any moment now), I find myself recalling some memorable vacations of my own.

And by “memorable” I mean they sucked.

When we lived in southern California, Hubs and I flew down to meet friends who were renting a condo in the Mexican resort area of Cabo San Lucas. A couple of weeks prior, I’d had a crown put on a tooth. Said tooth decided to fulfill my dentist’s prophecy that it “might need a root canal sometime in the future” by kicking my ass with excruciating pain on our second day in Cabo.

Thankfully, an expat in the condo complex knew a reputable local dentist who could see me right away. The dentist relieved my pain by performing the main part of a root canal—removing the offending pulp—which required drilling through my brand-new crown. He then packed the canals with some sterile inert material and placed a temporary seal to close it off until I returned home to have an endodontist finish the job. He also gave me some Vicodin, just in case. The grand total for his ministrations? $90.

The remainder of my vacation was blessedly pain-free until we got on the plane for home. As we began climbing in altitude, I suddenly felt a bolt of pain in my jaw so intense it left me pale and nauseated. Apparently, I had a tiny air pocket trapped in my root canal, and the change in atmospheric pressure triggered the pain (a condition called barodontalgia).

I begged the flight attended for a glass of wine—stat!—and chugged it along with a Vicodin (which I’d never taken before). The drug made me super jittery, so by the time we reached Phoenix to switch planes and go through U.S. Customs, I looked like a detoxing junkie with the shakes. But at least the pain had subsided once I was back at sea level.

I made it through Customs without incident. But then I had to get on another plane—and ascend yet again—triggering a second bout of barodontalgia during the last leg of our trip home.

A few days (and countless ibuprofen) later, I finally got in to see a U.S. endodontist who successfully completed the root canal. What a relief—at least until I got his bill: $1,100.

Dental work can be
restorative, but not when
done on vacation.

Rollin’ on the river

A few years ago, Hubs and I visited his cousin (I’ll call him Dick) and (then) wife for a long weekend at their summer place on the Susquehanna River in Pennsylvania. We almost didn’t make it back alive.

Returning from a relaxing boat ride down the river on a hot, humid Sunday afternoon, we spied ominous black clouds up ahead of us. We quickly got Dick’s 14-year-old son, who’d been wake-boarding, out of the water, and put up the boat’s bimini top to protect us from the rain headed our way. Someone suggested we get off the water right away, but Dick insisted he could beat the storm home.

Well, the storm was moving faster than we were, and it hit us with fury. The wind whipped up whitecaps and caught the bimini top like a sail, making it nearly impossible to control the boat. We were pelted with a driving rain so heavy we couldn’t see the shore—and the river was only about 100 yards wide at this point. Lightning was crashing all around us.

Hubs was the only one wearing a life jacket (his own, which he’d brought from home) and he tried to retrieve some for the rest of us from the boat’s storage bin, but they were all tangled up with line and other crap, and the boat was rocking and rolling so severely that he couldn’t stay upright. I felt fairly confident that I could swim to shore if the boat capsized (assuming I could figure out where shore was), but I was more afraid of being electrocuted in the water.

After what seemed like forever, Dick was able to maneuver the boat to shore and tie up at someone’s dock. We all scrambled out and ran up the bank to a covered picnic area where we huddled, wet and shivering, while the storm raged around us. There were some people nearby who’d taken shelter in their cars; they yelled to us to join them because it turned out we were standing under a metal roof—not the optimal sanctuary in a lightning storm.

The storm blew through in about another half hour (we found out later that a tornado had touched down nearby as part of the maelstrom). Our car-hosts offered to drive us back to the house. Within an hour, the sun was out again and, except for the outdoor furniture blown all over the back yard and a few small branches on the ground, you’d never have known what that bitch Mother Nature had done.

With the exception of Dick—who thought it was a big ol’ fun adventure—we were all pretty shaken, sobered by what might have happened and feeling grateful to be alive. The chardonnay tasted especially good that evening.

One year later, en route to Ohio to pack up and move my mother, we stopped in to see Dick and his wife again. Knowing Dick would suggest another boat ride, I had come prepared. As a joke, I stepped onto the dock wearing not only a life jacket but also floaties (inflatable arm bands), a snorkel mask and flippers, and carrying a pool noodle and a child’s inflatable pool float. Thankfully, this ride was uneventful.

A post script: Dick’s adventurous spirit extended to more than boat rides, and a couple of years later his wife divorced him.

In my thirties, I lived in Massachusetts with a guy who was an avid hiker. I was not. So when a couple I knew who lived in upstate New York invited us to join them for an early-summer hike up Algonquin Peak in the Adirondacks (the second-highest mountain in the state), I demurred.

So, people-pleaser that I was, I acquiesced. And lived to regret it.

I’ll give you the high points: It was unseasonably hot and muggy, and it was black fly season (those swarming, biting little f*uckers from hell). I started my period the morning of the hike, and “pack it in, pack it out” applies to used tampons (of which there were several). I started crying twice on the trail and wanted to turn back, but was too scared to descend by myself (and my asshole boyfriend wouldn’t come with me). It was so steep near the summit that I had to crawl on my hands and knees across ice above tree-line—something I do not consider “easy.”

When we finally got off the mountain and back to the car—a seven-hour ordeal—my girlfriend accidentally shut the car door on my hand (nothing broke). Then, we checked into the motel where my girlfriend had booked our rooms. It was a ramshackle old place, but seemingly clean. At this point, I wanted nothing more than a hot shower. I peeled off my sweaty clothes, turned the faucet and…rusty brown water spurted out. Thankfully, the water ran clear—and hot—after about five minutes, so I got my shower.

I also got rid of that boyfriend eventually. And I’ve never gotten near a hiking trail that “easy” again.

This 1905 quote, attributed to Elbert Hubbard, kinda sums up these vacation experiences: No man needs a vacation so much as the man who has just had one. And then there’s this Jewish proverb: No matter what happens, travel gives you a story to tell.

So what about you? Got some tales about vacations from hell to share? Please do!

4 thoughts on “A Mexican root canal and other vacation disasters”