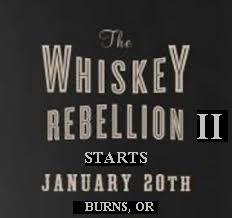 It can’t be easy being a revolutionary. It’s cold in the woods, the food sucks, you can’t watch the Jerry Springer Show on TV, and worst of all, you’re sharing a bathroom. It’s tempting to seek out greater comforts and a modicum of privacy. But that causes friction. For example, the Cuban Revolution almost got sidetracked when it was discovered that Castro had a motor home with a shower and satellite dish hidden in a jungle clearing across the border. Apparently it was on loan from Che Guevara.

A similar temptation is now facing the patriots occupying the Malheur refuge in Oregon. According to rawstory.com some of the militants are staying at hotels in town and eating at diners. You can just picture some guy at the café telling the waitress “Okay, just one more refill Marge, but then I’ve got to go save the Constitution.”

At least that “constitutional commuter” is showing up, unlike Captain O. Captain O is a local (ie from Arizona) who’s been actively recruiting volunteers and donations for the cause through social media. But he hadn’t been seen in a while, so other militants went to visit him at the motel. They found the good captain in the middle of a drinking binge funded in part by donations.

I can relate to Captain O. I did an Outward Bound in the tenth grade and spent a month in the Cascade Mountains in Washington. The only way to bathe was in icy-cold lakes and streams, so I bathed exactly once in four weeks. I ate gruel and nuts. And I lived through a bear attack that made the one in The Revenant look like a poodle humping your shin. Okay, that last part’s not true, I just startled a squirrel (but it was a big one). So I can tell you that after enough time disconnected from civilization, all you start to care about is a hot shower and a Snickers bar.

I predict that Captain O will go down in history as the one who transformed the quack-mire at the refuge into the far more enjoyable and sustainable Whiskey Rebellion II.

One thought on “Is The Oregon Occupation About To Take A Sudden Turn?”