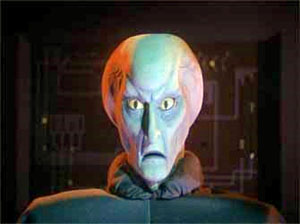 One of my earliest memories was watching the Apollo Moon missions on TV.

One of my other earliest memories was hiding behind my mother from a frightening image on TV: a giant, alien, disembodied head. If you don’t know how those two could possibly be connected (besides an early indication that my generation watched too much TV) … then you don’t know Star Trek. (That episode, by the way, was “The Corbomite Maneuver”.)

Could it have really been fifty years ago? A whole half century since the single most influential entertainment show in television history debuted.

Yeah, that’s a big claim, but think about it. That weird space show with the bad special effects did more than spawn a bunch of movies and spin-offs. It influenced people who became astronauts themselves, as well as scientists of every stripe. It became a cultural phenomenon, to the extent that even people who hate science fiction recognize “Live long and prosper”, and “Beam me up, Scotty”. It went all the way from there down to a little kid who was inspired to write stories about space himself, and who now defines himself as a writer above almost all else.

Just to be clear, that would be me.

Lots of electronic ink is being spilled this week over the big five oh. Why did it become so huge? The simple answer is that it held one thing that so much futurism of the time didn’t: optimism. It posited a future universe in which we not only survived nuclear weapons, racial conflict, despots and election campaigns, we triumphed. We went out beyond our world together, as one race.

Can’t we all just get along? In Star Trek, we did. That was what it was about, not the rubber alien faces and over-emoting.

On a personal level, it led me not only to write stories myself, but to have my first fictional role model. I was a shy kid, suppressing my emotions, misunderstood—alien. The character of Spock spoke to me … I even had a blue sweatshirt with an insignia on it that looked a lot like his uniform shirt.

The less said about my haircut at the time, the better … although it may help explain why I wasn’t the most popular kid.

As a teen, it seemed like I was in an exclusive club, sometimes too exclusive—sometimes I thought I was the only Star Trek fan in the state. In a weird way, I was upset when it went from a canceled cult show to a franchise. It was like losing ownership. But now Star Trek belongs to the World, and after fifty years it’s still going strong.

That’s a good thing—the world needs all the optimism it can get. 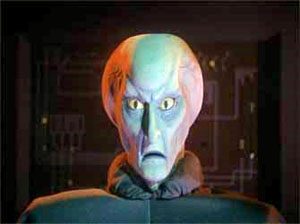 7 thoughts on “Star Trek at Fifty”