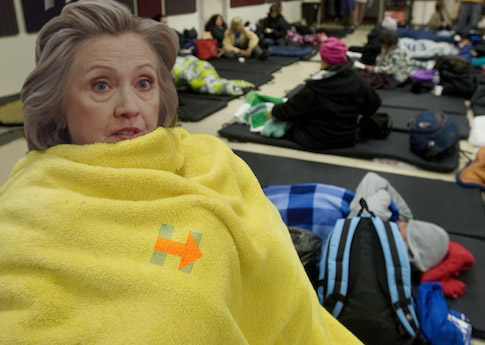 ATLANTA, GA – Presidential candidate Hilary Clinton in a brave new campaign strategy is reaching out to potential voters on the street in tent cities and in homeless shelters. Clinton has pledged to blend in among the population in order to relate to the needs of the 47%.

Clinton, the last resort favorite to win the Democratic Party’s nomination for the November 2016 election, expects to reach homeless voters by highlighting the economic chaos platform of her campaign which she has promised will rationalize homeless normalcy for “everyday Americans.”

Her nearest base camp is the Gateway Center, a facility that provides access to shower and laundry facilities at cost to those that live in the nearby tent city under I-20. Clinton has dismissed her secret service and makeup personnel, in order to have the total experience “exposed.”

Last Monday, Clinton had her first taste of the homeless world, where after waiting in line for two hours in line for a bowl of soup, Clinton was face to face with disgruntled potential voters. A flash mob broke out while she was in mid-sentence, reportedly over the soup kitchen running out of food.

The following night after taking refuge in the shelter Clinton continued having problems getting her points heard. After three hours of reiterating bullet points from her Sharing Is Daring & Caring initiative to inspire voters to do more with less, she was accosted by political incumbent rivals and stripped of her belongings.

John Podesta, Clinton’s campaign chairman and adviser, said her economic platform was a daring bold move to push the United States in a competitive, profit driven workforce that inspires workers to take any opportunity offered no matter the sacrifice, in the name of patriotism.

“We believe its a comprehensive guideline that shows profit driven economies sustain America’s infrastructure, not worker ambition and desire of career growth, which have left our country’s economy in a state of stagnation.” Podesta said.

Clinton has decided to reach out to the homeless youths as well. A rally call for the 47% under her campaign moniker has seen a rise in button and bumper stickers in a dual role – support and patch friendly accessory.

Democratic senator Elizabeth Warren, former Harvard professor and founder of the U. S. Consumer Financial Protection Bureau, is concerned about the hidden implications of Clinton’s platform, citing their effectiveness in implementation would likely hinder the economy beyond repair and open the door to a climate that rivals the Boston Tea Party.

“She’s going to have a hard time convincing over 200 million of her constituents not to revolt after eliminating any tangible streams of income and pulling the last piece of bread from their mouths,” she said, referring to Clinton’s do more with less rhetoric.

On anti-homeless laws, Clinton has supported many that impede on her constituents right to exist, as some in her party deemed it necessary in order to implement programs they felt necessary to get people into shovel ready jobs.

But inside sources within her campaign say she is expected to relinquish her stance on at least three laws relating to public sleeping, which has been prohibited and implemented as a Class X felony in over 30 states since 2011.

Clinton says that the laws and ordinances are there to build a bridge between businesses and those who have the unfortunate circumstance of not being able to afford a place to live to maintain equity for business owners and their property value.

Supporters from the business community that came out to the tent city to support her campaign believe Clinton will follow through on her promise of relegating homeless people into building up their own designated perimeters, and allow them to set up general stores to bring a different commerce to them. Clinton took this position in her last speech on cutting taxes for the poor.

“Americans have always persevered through ingenuity in tough economic times, and now it is time for these people to put the hard work in and build their community up the same as the previous generation did with Hoovervilles, while improving their employment skills in the process.” said Clinton in her speech around Sector 7, a tent city by the bus depot.

Hoovervilles, named after former president Herbert Hoover, were heavily populated towns built by homeless people during and after the Great Depression. As a great majority were construction laborers, they built their shelters out of stone, crates, scrap metal, and wood.

“The new rising of tent cities takes the risk of faulty shelters being erected and possibly injuring the occupants while providing the same level of elemental shelter,” Clinton said to homeless patrons before lights out.

Creating new laws of public sleeping will help designate safe and isolated areas for homeless to invite investment in tent city infrastructure through private philanthropy and local business, including setting a neighborhood perimeter that sets boundaries for both sides.

Elizabeth Warren has suggested creating legislature to allow cities to take control of foreclosures plaguing neighborhoods to eliminate the homeless problem all together. Clinton has rejected the idea, citing it would make the 2008 bank bailout a “complete waste of time.”

“Tent cities allow American people to live within their means. Dwellings outside the average citizen’s financial reach while maintaining an already lower standard of living. My campaign platform allows for more Americans to get within affordable housing while paying their fair share back as a productive citizen without getting burdened.” Clinton said to homeless people waiting for lottery picks for beds in a local shelter that evening.

After a week on the campaign trail, it’s unclear whether Clinton’s campaign is reaching their intended goals with their demographic, who seem to be preoccupied with other pressing issues to respond to her campaign points.

Clinton will leave Atlanta Friday for the next campaign stop in Seattle, where she will spend two weeks touring the five tent cities situated between downtown and the University area.