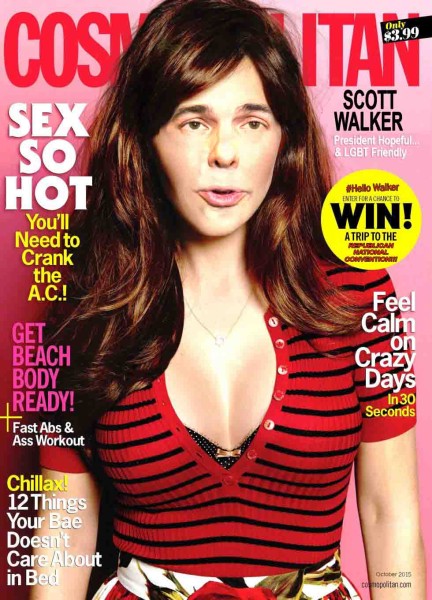 MADISON, WI — Republican presidential hopeful Scott Walker graced the cover of Cosmopolitan magazine in June 2015 to respond to criticism of his silence on same sex marriage. Walker, who appears in drag on the cover, said he hoped people could draw their own conclusions once and for all on where he sits on the issue.

In the past when asked about his stance on same sex marriage, Walker characteristically avoided the question, while trying to change the topic of conversation into his plans for employment resurgence in Wisconsin.

Unfortunately, his controversial actions in Wisconsin did not win him any supporters.

Under a cloud of controversy, Scott Walker is no stranger to controversy. In 2011 he destroyed Wisconsin’s public employees by dismantling their union and collective bargaining rights, and barely escaped being removed as governor when a recall election was done the following year. Soon after, in what critics perceive to be attention maneuvering, Walker publicly proclaimed he supported heterosexual marriages only, but just for tax purposes.

After Walker’s sons came public in opposition to his father’s anti-same sex marriage, Walker avoided any talk related to gender and sexuality rights for the remainder of his tenure as governor.

Since announcing his bid for presidency in 2016 and subsequently dropping out, Walker’s political camp has been doing damage control to ensure he wins future support within the LGBT community. In an effort of showing solidarity to the plight of LGBT civil marriage he took to Cosmo to set the record straight to naysayers.

“I applaud any same sex couples willing to live publicly what Republicans have been doing in the dark for decades,” Walker said in the interview.