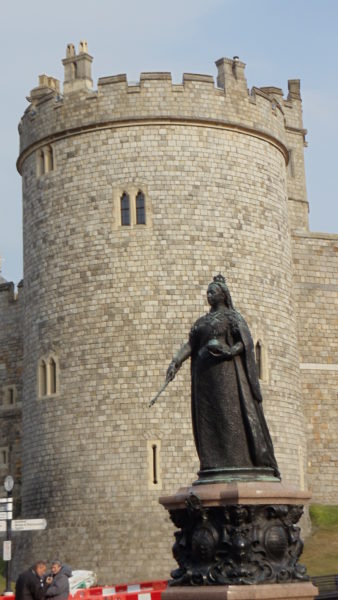 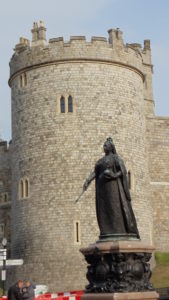 I’m a huge Anglophile and I despise the Big Orange Cheeto.  Why are these two random things related?  Because earlier this week Queen Elizabeth II, Elizabeth Alexandra Mary,  House of Windsor, hosted  Vlad The Deal Maker at her home in the village of Windsor. Oh, to have been a  mouse and capture the moments between them. I would give up a year’s worth of Wisconsin cheese curds.

Unlike the moments of the NATO conference and Thursday evening’s dinner with Prime Minister Teresa May and her significant other,  the visit of POTUS and our immigrant First Lady was barely televised. News outlets report that the First Couple showed up 15 minutes late for “tea time” with the Queen. We had a few glimpses of staged waves and greetings.  Because POTUS is a head of state, there is no protocol requirement that he or the First Lady bow or curtsy to the Royal leader of the United Kingdom.  However, during a military review in the Windsor’s private family courtyard, POTUS jumped ahead of the Queen multiple times.  She is the Queen of England, but aside from that, if you are walking with any random 92-year-old person, even someone coming out of the grocery store, don’t you stop and see if you can help them?  I know he wasn’t going to carry her purse and it’s mystery contents, but he could have slowed down a little.  And as my mom would have said, “Button your suit jacket for heaven’s sake in the presence of royalty. Were you born in a barn?

The two played march-around to review the guards in the soldier’s tony uniforms and bear-skin hats, and then went into the private quarters.  Since we will never know exactly what happened during their conversation, as a Very Stable Genius I’m going to pretend I’m that mouse and report on what my imagination tells me.. This is my article and I can do what I want.

Let’s back up a few minutes. The car carrying POTUS and the First Lady will pass through the lovely village of Windsor where a statue of Queen Victoria reigns in the center of town. Queen Victoria was the present Queen’s great-great-grandmother. The statue will be wearing a pink pussy hat made of the finest lamb’s wool from Scotland (which POTUS needs to understand is part of the United Kingdom, but not the same as England, unlike what he asked a British reporter this week.)

The black fleet of limos will traverse up the hill past the statue into the Windsor Castle complex, passing St. George’s Chapel where the recent marriage of the Queen’s grandson Prince Harry took place, to American Meghan Markle. POTUS was not invited. OPRAH was. Let that sink in.

The familiar Queen’s Guards  will flank the fenced opening of the Family Entrance to Windsor. POTUS and FLOTUS will enter the private residence, only to be greeted by four female corgi’s in pink pussy hats, made especially for the Queen’s treasured dogs. Corgis are sweet dogs but they also know people, and all four of them nip at 45’s heels.

In my scenario (and remember I own the computer), none of the royal men are represented in this initial greeting. But Elizabeth R, daughter Anne, Princess Royal, daughter-in-law Camilla, Duchess of Cornwall, and her two daughters-in-law Catherine, Duchess of Cambridge and the newest member of the family, Meghan, Duchess of Sussex, are there to greet the American President and his wife. Yes, they are also wearing Pink Pussy Hats with 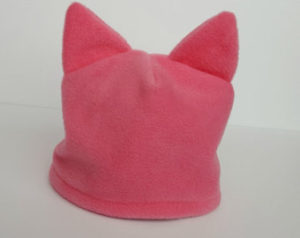 diamond tiaras over them. The Queen, of course, has the grandest crown,  from her grandmother Queen Mary with a large diadem in the middle. Even Princes Charlotte gets in the act, tugging on her teeny-tiny Pink Pussy Hat. and holding her mother’s hand.

And just to be really pissy, The Queen hires Bette Midler to dress as Queen Victoria.  Both Queen Elizabeth and Bette, as Victoria used to say, are most amused.

POTUS, a devotee of Henry the Eighth, will be disappointed that Elizabeth R doesn’t show him Henry’s highlights of the old castle, the famous portrait where Henry looks like he’s eaten 12 large salamis, the bedroom where he held tortuous watch over multiple wives as they delivered a child that was not a son, his armor, and his burial space at St. George’s Castle. Henry the 8th, whose persona 45 admires greatly, is buried at St. George next to his third wife, Jane Seymour (not Dr. Quinn, Medicine Woman.)  Henry died in 1547.

Disappointed, POTUS will tell the Queen that “Henry the Eighth was more of a leader than Teresa May has ever been,” to which the queen will not reply.

The mouse returns to her hidey hole, disgusted as the lack of grace and respect shown to the Queen by this buffoon.  The Queen retains the grace that she always carries, despite wearing his silly pink hat under her tiara, and escorts the couple to the door.  She is never allowed to express a political thought, but in my mind she has three thoughts: 1. Wouldn’t it be fun to see if there’s a dungeon in this centuries-old building,  2.  Thank God these classless bozos are leaving, and 3.  It’s five o’clock somewhere, where’s my gin and Dubonnet?

Did this make you laugh or want to throw something?  If this piece got a response, please share it on your Facebook page.  You can also click the “like” button for Humor Outcasts at the top of the page.  My books are available at Amy Abbott Book Page.