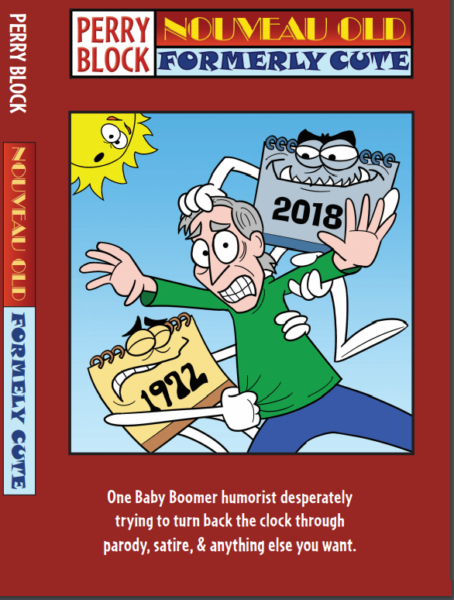 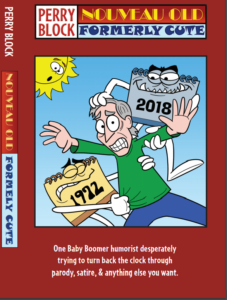 Today is launch day for Perry Block, author of Nouveau Old, Formerly Cute. Available on Amazon in print and email formats, this book will make you laugh out loud!

Book description: Like you, Perry Block is a Baby Boomer who turned around one day in 1978 and suddenly found himself 40 years later at an age he always thought was exclusively reserved for people’s parents.

Through a series of often hilarious essays, Perry tries to make sense of it all, aided by his son Brandon and a host of other real and fictitious characters, including Batman, Cupid, the Legendary Jewish Vampire Vlad the Retailer, Richard Nixon, Moses, and more.

Every Boomer concern is here – aging angst, fatherhood, the singles life, friendships, fading looks and physicality, social trends, the1960’s, religion, Judaism, the writing life, parody and satire, self-deprecation, and the nagging worry that not only has he measured his life in coffee spoons, frequently the coffee hasn’t even been hot.

We are pleased to present a print interview with Perry Block. Definitely a person you want to know…from a distance?  (Ha Ha, that’s a joke that he would appreciate!)

Tell us about Perry Block. 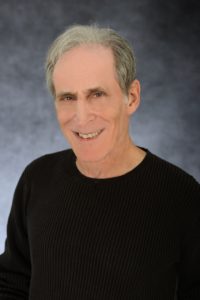 I was raised in Merion Pa, just outside of Philadelphia, in a very warm and supportive Jewish family. How I was born an Episcopalian is anyone’s guess. I have one older brother named Steven.

I attended undergraduate school and law school but realized that law was probably not going to be my forte when upon graduation I still thought that a “tort” was a delicious small Italian pastry. Most of my career has been in Human Resources.

I have two sons: Brian, 28, a successful businessman who lives in Washington DC and Brandon, 22, an aspiring journalist/filmmaker living in Baltimore.  They are both so accomplished I had to write a book to even get them to talk to me.

How did you begin writing humor? Are there other genres you like to write?

I’ve always been interested in humor but didn’t begin writing short humor pieces until I was in my mid to late thirties. I found I was able to get a number of my pieces published in local newspapers although some, like “The Pure Joy of Quantum Mechanics,” were less amusing than others.

Later I developed the HR Comedy Troupe, a sort of SNL for Human Resources professionals which performed at Society for Human Resource Management (SHRM) chapters throughout the Philadelphia area.  During the run of the Troupe, we presented comedy sketches such as “Sam Meritor, Anti-Harassment Private Eye,” desk pieces like “HR Action News,” and numerous song parodies including “OSHA’s Coming” (to the tune of “Oklahoma”).

Aside from humor I have always wanted to write Shakespearean Sonnets, but I’m afraid some jerk has already cornered the market on them.

When did you get the idea to write this book? Why did you pick this title?

When I first joined Twitter in 2010 I looked around for humor directed at Baby Boomers and found very little. Most Boomers on Twitter were writing about how Boomers should embrace their age and grow old with grace and dignity.

Ridiculous!  I didn’t want to embrace anything that was draining me of youthful cuteness and turning me into the little old guy in the back of the hardware store who makes the keys.

Thus was born “Perry Block – Nouveau Old, Formerly Cute,” a slightly jaundiced look at all things Boomer including aging, social trends, self-deprecation, the sixties, and more. Also I wrote many non-Boomer oriented pieces which I sometimes referred to as “parody, satire, and anything else you want.”

Why Write a Book?

Yep, another Boomer who’s sold out.

We hear a lot about the Boomer Generation. What does it mean to you to be part of this generation?

For me, a Boomer is someone who has one foot in the black-and-white fifties and the other in the psychedelic sixties. We Boomers may also have fleeting memories through the Quaalude induced haze of the disco seventies, but we are much more defined by the two decades prior to that.

We loved the Adventures of Superman and The Lone Ranger, sported short hair, and knew America was always right and just. We later witnessed the assassination of John F. Kennedy and the birth of the Beatles, grew our hair to our navels, and learned that America could sometimes be very wrong and very unjust.

I think our amalgam of the fifties and sixties explains in part why many Boomers are liberal and open-minded in concerns like politics, social issues, and the arts but conservative when it comes to adult content in movies and TV, piercings and tattoos, and rap music unless practiced by Lin-Manuel Miranda.

Added to all this is a powerful strain of aging angst as the generation- which defined itself as being forever young reaches the age where the only sixties we experience are the sixties with Medicare in the middle.

Oh, and one other thing.

What is your general opinion of relationships?

As Woody Allen said, “most of us need the eggs.”  I’m still waiting for the chicken.

What do you want your readers to know about you?

My interests include movies of all kinds, especially those from Hollywood’s Golden Era.  I particularly like Humphrey Bogart, Cary Grant, and Jimmy Stewart, and would gladly travel back in time to hook up with Ingrid Bergman, Vivian Leigh, or just about any female star of the past except Thelma Ritter.

I am not particularly athletic and when I was younger I threw like a girl. But I’ve worked on that, and today I’m proud to say I throw like a woman!

I also like reading about history, in particular the medieval period – Love that Charlemagne! – and enjoy food of all kinds, especially Asian.  There is only one food that I despise, and that “food” is cheese. Along with death and blind dates, I consider cheese one of God’s dirtiest tricks upon humanity.

What’s your view on aging?

I’m definitely against it, and I’ve gone so far as to write a strong letter about it to my state representative. Frankly, I will never vote for any elected official – state, local, or federal – who’s in favor of me getting any worse looking.

The only way to truly combat aging, I believe, is to leave nothing on the table. That is, to strive to discover our passions, shoot for our dreams, and do the best we can with our lives with the time we have.

I can’t say I’ve always practiced what I preach.

For me a major life move has been going into the kitchen to get more popcorn while binge watching Veep.

What do you want readers to get from this book?

I sincerely hope that I have portrayed some of the thoughts, feelings, and hopes of the Boomer Generation in a humorous and entertaining fashion based upon a fictionalized version of me.

I also hope that my book presents the type of humor – especially in the many non-Boomer related parodies and satires throughout – which resonates with people of all ages, not just us Boomers.

Finally, I hope that somehow this book will fall into the hands of actress Scarlett Johansson and she will respond to the subliminal messages I’ve loaded onto almost every page that she come to me.