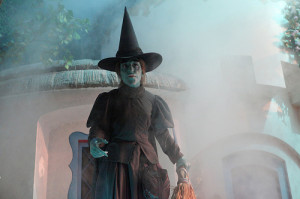 We are in month three of my spouse’s unemployment and things are looking mighty grim. Despite blanketing the internet with resumes, he’s only managed three interviews. I would have had to hire a helicopter, a publicist, and bought television air time to even get a nibble but I digress. It’s been fourteen years since his last bout of unemployment so we are all a bit rusty.  He’s gotten so desperate he’s started to voluntarily clean things and dare I say it – get rid of junk!

That’s normally my job as both the resident wicked witch and family GPS. If I had a nickel for every time I heard ‘Hey, where’s my….?’, and ‘You got rid of ……., didn’t you?!’, we could both retire. I married a man who is a walking archive. He not only remembers damn near everything that’s happened since at least high school, he still had most of the clothes, shoes, books, banners, pictures, calendars, utility bills and other crap to prove it. That is, until he was introduced to the magic of yard sales and the trash can.

We had managed to get things down to a dull roar b.c. (before child), but the basement remained the black hole of the house. Then one day, we discovered we were invaded by a mysterious odor. The ‘offender’ was so sharp that for once my hubby was asking me if I could smell it.  This from a person who could have b.o. that would kill plastic flowers and not notice. Our first suspicion was a dead mouse or a powder room leak. My brave man took this as a challenge and thus began the ‘dammit-I’m-getting-to-the-bottom-of-this’ cleaning project.

He cleaned the floor to the point we almost got loopy from the Top Job fumes but it was worth it. We didn’t find Jimmy Hoffa (for you fellow dinosaurs) but we did find some old photos, a scary flask shaped bottle of grenadine, stupid amounts of salad dressing on our pantry shelf but not the cause of the bad smell. It’s more accurate to say that HE didn’t find out what the stench was.

Once our pantry shelf that defied the laws of physics was emptied, the pantload of stuff had to be put back. While I was replacing some boxes of cereal, I found it. I was actually too skeeved out to find out 100% for sure what ‘it’ was but the stink was unmistakable. Something liquid like and completely out of place was leaking out of a can of oatmeal which I promptly threw out. Then I did a full body wretch and finished cleaning the shelf. Should I have told my husband? Nah, the basement never looked so good!