BOSTON.  This city’s many teaching hospitals makes it a magnet for innovations in healthcare, with spinoff uses that often ripple through the rest of the economy.  “The first surgery using ether anesthesia was performed right here,” says Dr. C. Emil Nosgrove as he looks down into the “Ether Dome” at Massachusetts General Hospital.  “I understand it is now used as a recreational drug, but I wouldn’t know anything about that.”

With a long history of pioneering breakthroughs it is hard to get the medical community here excited about a new development, but there is a palpable sense of “buzz” surrounding a prototype that would improve one of the most common–and humble–articles used in modern medicine; the “johnny,” the common name for the gown worn by patients in hospitals.

“Basically, we started off with a bad model,” says Armand Kleinsworth of MedTech Innovations, the investment firm that is funding beta-testing of the new design.  “We used Cheryl, the admissions specialist in outpatient surgery who takes aerobics classes three days a week and jogs on Sunday.  We should have been using Cindi in the dermatology lab, who takes Zumba classes six days a week and runs marathons on her day off to relax.  She’s a lot skinnier.” 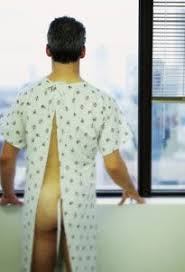 Transparency is key to a good doctor-patient relationship.

A hospital “johnny” is a embarrassing unisex garment that unsuspecting patients are forced to wear in hospitals in order to impress upon them their subordinate role in the American healthcare system.  A recent survey revealed that only 37% of those admitted to U.S. acute-care hospital could close their “johnnies” in the back, a figure that sent shock waves through the highly-regulated healthcare sector.  “That number is WAY too high,” says Dr. Eric Fleigarten, incoming president of the American Hospital Association.  “I’d like to get it down into the teens or even single digits so I can have more fantasy fodder for those long nights on the ward.” 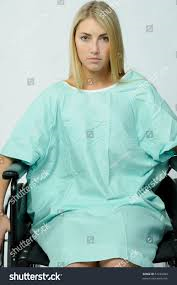 “Why do I have to wear this? I just came in to the pharmacy to buy dental floss.”

The potential for abuse has raised concerns among medical ethicists that some doctors may engage in over-prescription of hospital johnnies for prurient purposes.  “I categorically deny that any properly-credentialed physician would ever engage in such conduct,” says Fleigarten as he helps twenty-three-year-old Amber Waverly into a johnny.  “There should be nothing between doctor and patient at a critical time like this, when she’s trying to get her ticket validated for the parking garage.”