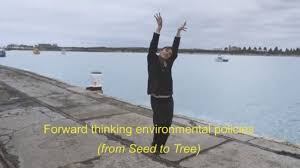 BOSTON.  It’s 7:15 a.m. and Adam Ebesnik is emerging from the underground escalator to Dewey Square on the edge of the Financial District here when he sees Eve Williams, a young woman in tights and a leotard, bending over with one leg extended in an imitation of a blue heron.

“Keep up the good work,” Ebesnik says as he passes by, a friendly overture that seems out of character for the busy mutual fund executive.

When asked what prompted him to communicate with a total stranger in this notoriously unfriendly city, Ebesnik is defensively candid.  “Thank God somebody’s doing something about climate change,” he says as he stops at a food truck for a bagel.  “I care, but not enough to actually do anything about it.”

The young woman who elicited thanks from a grateful commuter is part of a chain of similarly-outfitted terpsichoreans who have taken to the streets in a desperate attempt to stop or at least delay the ravages of climate change that they see as man and womankind’s last best hope to save the planet and, in the bargain, their unused credit balances at local dance studios.

“I couldn’t live with myself if the human race was wiped out because I was too apathetic to get out here and perform my ‘Song Cycle/Nature Circle,’” a seven-part suite that runs the gamut through animal, vegetable and mineral forms of matter, as well as the four basic food groups.  “I couldn’t live with anybody else either,” she adds sheepishly, “but I’m really not much of a people person.” 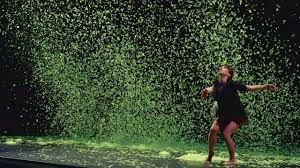 “If you really cared, you’d be dancing!”

People have used dance to affect atmospheric conditions since the dawn of the human race with little to show for their efforts, according to Army Corps of Engineers Major Thomas Sacco.  “You can dance in the moonlight all you want to and it won’t amount to a popcorn fart in a hurricane,” he says in the gruff tone of voice he has used to boss around subordinates for four decades.  “I don’t get paid unless I build a dam or drain a swamp, so I’m going to stick with insensitive destruction of the environment if you don’t mind.”

But interpretive dancers say this time around is different because their gyrations are guided by scientific research they picked up on social media and public television.  “Before people were dancing to change the weather, we’re dancing to change the climate,” Williams says as she throws a shawl around her shoulders to warm herself from a cool wind off the Atlantic Ocean.  When asked the difference, she says “Weather is something happening tomorrow that you can’t predict, climate is something happening a long time from now that you can.”