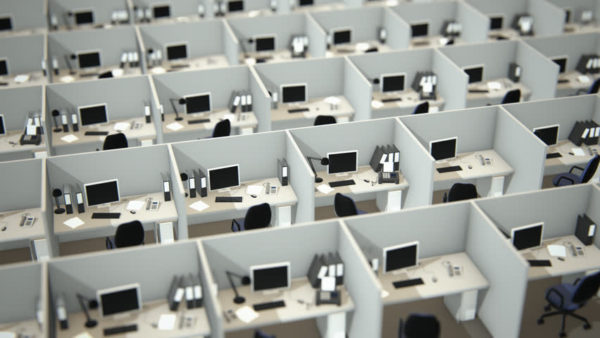 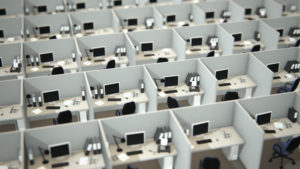 Perhaps the most challenging aspect of working in a corporate environment is being relegated to the slums, also known as the cubicle. The median income in the cubicle slums is well below the Canadian average.

Or maybe I was a pill in one of those multi-box pill containers that old people have when they take 37 types of medicine to keep their heart beating. It’s Tuesday, time for the red, blue, green, orange, blue-green, rosy pink and black pills. I always hoped I was the cyanide pill, and I could end things quickly at any moment. Like when some joker would pretend to knock on my cubicle wall, which wasn’t a real wall but a giant cushion. “Oh, just come in for fuck’s sake. It’s obvious I don’t have a door or real walls. Or a roof over my head. I’m poor corporate folk. What’s it like outside? Is the sun shining? I haven’t seen the sun in weeks. Do you have any vitamin D?”

You know what other type of room has padded walls? That’s right – the loony bin. Complete with my financial straitjacket and Starbucks water vessel filled with CLR, I was committed. Um, to my job, I mean. Obviously.

Every once in a while I would poke my head up, like a scuba diver who needs to refill his tank. Oops, rose too quickly. I have the corporate bends.

The cubicle I occupied was so far away from the corporate action. I think it was located in Venezuela, but I can’t be sure.

The cubicle was developed by designer Robert Propst and released in 1967. Mr. Propst had just finished reading Charles Dickens’ Hard Times, a novel about wealth and utter poverty. Mr. Propst was struck with a wonderful idea. “What if I can create the slum atmosphere inside the office building. Wouldn’t that be progress?”

In the rich corporate suburbs – the offices along the outer edge with windows – you will find, maybe, two family pictures. Wife and kids playing soccer.

In the cubicle there are 1200 photos tacked in a chaotic maze. Your birth, your toilet training, your best tuna casserole. A desperate act to remember that you were once human, but now you’re Neo from The Matrix with a phone cord, printer cord, computer cord and feeding tube connected to your body. “Shit, how do I escape? Do I eat the red donut or the blue donut?”

I have a question. When they vacuum the rugs, do they also vacuum my cubicle walls? I hope so. I want to slam my head into something clean. I don’t even have a door to slam when I’m angry.

To be honest, most of my time in a cubicle was spent eavesdropping. I guess that explains the NDA I had to sign.

Then I broke out. They’re still looking for me.