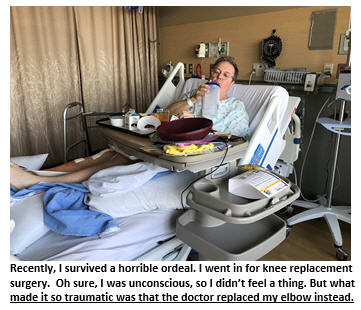 When it comes to health matters, I ’m a very private person. I almost never air what’s ailing me – unless I’m talking to an immediate family member, close personal friends, neighbors, second cousins, co-workers, or a stranger lucky enough to be standing next to me in the grocery store checkout.

That’s why it’s challenging for me to share with my readers the details of my most recent medical ordeal. But I’ll try – just this once (and perhaps in parts 2, 3, and 4 of this multi-part essay).

Recently, I underwent knee replacement surgery. My doctor said I was one in a million, which made me feel very proud of my achievement and grateful that I’d beaten the odds – until I realized he meant that easily a million others had endured this procedure this past year as well.

The day of reckoning was inevitable. I had been diagnosed with “bone-on-bone” advanced osteo arthritis in both knees eons ago. I’d long since accepted the harsh reality that the Olympics were not in my future – mostly due to my deteriorating knees (and perhaps in part because coaches said I lacked the requisite speed, strength, endurance, and talent). Rationalizing that it made economic sense to postpone this surgery until I reached Medicare age, I have earned martyrdom for pounding the pavement many years beyond the expiration date of my knees. This past January I turned 65. Time to face the music. Thanks to Medicare, the whole procedure cost me only slightly more than a KFC Family Meal.

The doctor broke the news that the odds of a full recovery were barely 999 out of a thousand. But I decided to laugh in the face of the Grim Reaper and boldly go where no man has gone before. “Let’s do it, Doc!” We’ll skip the pre-game show (checking in, changing into a backless gown, propositioning the doctor as the anesthesia took hold) and go to the actual slicing and dicing. I won’t lie. The experience was brutal. I now can relate to those brave Civil War soldiers who, in the heat of battle and bleeding profusely, were carried on stretchers, barely reaching the medical tent and a medic wielding a rusty saw, with nothing to dull their searing pain but a shot of whiskey and a stick to bite on.

My experience was eerily similar – except for the fact I had no gushing blood, was unconscious the entire time of the surgery, and when I woke up, I was lying in a comfy adjustable bed in a sterile hospital with a stunning view of the Olympic Mountains, and was offered all the ice cream I could scarf down. That being said, not one of the four nurses waiting on me hand and foot offered me a shot of whiskey. (I may file a complaint.) So, I had to gut it out the hard way – with morphine.

As I came to from the anesthesia, there was a bright light glowing all around me. I sadly mused that I was not among the 999 – that the brilliant rays of Heaven were beckoning. But why was this angel wearing a white uniform and stethoscope? It turns out that the bright light was not the rays of Heaven welcoming me home but a nurse opening up the curtains in my earthly recovery room. It was incredibly sunny out.

People have kindly asked how I’ve been feeling in the days and weeks post-op. If I had to summarize it in one word (without using a thesaurus), I’d say: “OOOOWWWWWWWWWW!!!!!” – followed by a flurry of expletives that my editor censored, in case kids are reading this.

I’m home now, recovering. I’m determined to tough it out – in quiet desperation, all alone in my man cave, since my wife abandoned me after only 12 hours of my whining. Frankly, I would rather not dwell on the devastating pain I’ve withstood hour after hour, minute after minute… but if you insist, here goes…

Every day throughout this never-ending saga (it’s been three whole weeks) I go through the same torturous routine: it starts with encasing my knee in an ice wrap, then lying in the recliner, elevating my knee, and reaching for the remote. I am trapped in a living hell every second of every day, with nothing to do but watch movies on Amazon Prime (or Netflix or Hulu or HBO), pat a kitty, or stare at the incredible scenery outside my window, with a bowl of chocolate chip cookie dough ice cream – or an occasional slice of pizza. Don’t feel sorry for me. I’ll be okay – even though I’ve already powered through Season 3 of Mrs. Maisel, and Season 4 doesn’t come out for another 9 months. 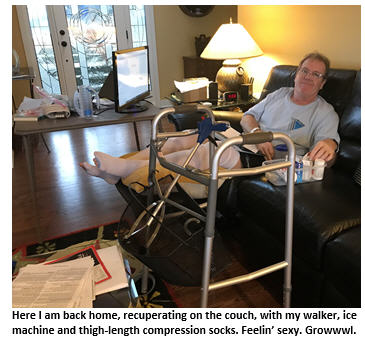 For a full month after surgery, I’m not allowed to drive – partly due to the powerful meds and also because my doctor said I’m a terrible driver. And because my right knee currently has the strength of a hamster – who has just had knee replacement surgery. Despite my misery – or perhaps because of it – my wife and I are much closer, often right next to each other in the car, as she drives me from my doctor’s appointment to PT to Burger King and anywhere else I fancy.

I try to show my appreciation by calling her “Sweetie” at least forty times a day, as in “Sweetie, can you get me another slice of cake?” or “Sweetie, can you pick up my phone? It’s fallen and it can’t get up.” Any time I ring the bell, she’s right there at my side. Whenever I start to feel a tad guilty that perhaps I’m imposing on my kind-hearted wife, I remind myself, “Hey, I’m the one confined to the recliner” and then I ring the bell again, because I’m in the mood for a grilled cheese sandwich – and she obviously loves cooking for me, as evidenced by the fry pan always in her hand when she appears.

While it’s been arduous, I won’t let it break me. Just last night, in my darkest moment (stuck in the closest with my walker, unable to locate the light switch) I looked deep within my soul and said to myself – and to anybody checking my hourly Facebook updates – that as God as my witness, someday – I don’t know when – I WILL drive a golf cart again!

One thought on “My Heroic Recovery from Knee Replacement Surgery”