Skip to content
Recent Humor
English Majors Name Screwtop Wine Bottles Most Important Invention
M as in Mnemonic…
Following Wild Card Loss Patriots Release Fan Who Washed Lucky Socks
On a scale of cats, how you doin…
Did You Find a Pair of Glasses I Lost?

WASHINGTON, D.C.   Frustrated by the Supreme Court’s rightward drift, Associate Justice Stephen Gerald Breyer announced today that he will step down next year in order to pursue his interest in air guitar. 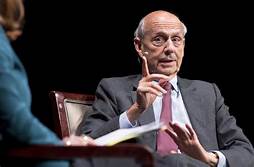 Breyer:  “I didn’t bring my air guitar with me, but if someone else has one, I’d be happy to show you a few chords.”

“Steve is a huge air guitar nut, but his playing has suffered because of all the time we have to spend listening to stupid lawyers argue nit-picky issues,” says fellow Justice Elena Kagan.  “He’s been stuck at the Joe Perry level for years, but has the capacity to perform an Alvin Lee solo with enough practice.”

Alvin Lee of Ten Years After, left, with Justice Breyer, right, in wig.

The Supreme Court is the highest court in the United States, and is composed of nine members nominated by the President and confirmed by the Senate.  Air guitar is a form of pantomime in which a federal judge pretends to play rock or heavy-metal guitar solos accompanied by exaggerated strumming gestures and a petition for a writ of habeas corpus.

Breyer was nominated by President Bill Clinton in 1994, and right-wing critics say the senior justice long ago entered his dotage.  “It would be one thing if he liked Ted Nugent,” a guitarist who opposes gun control, said Malcolm Cowpers of the American Freedom Forum.  “Instead, he spends his time during oral argument noodling around like Jerry Garcia under the bench.”

Breyer will be 83 in August, and liberals had urged him to resign while Joseph Biden was president in order to give him the chance to appoint his successor, but he resisted until now.  “I’ve been trying to master Clapton’s solo on ‘White Room’ for four decades,” Breyer told Air Guitar Player magazine in an exclusive interview.  “It’s tricky–you have to keep your hands going and pump the air Wah-Wah pedal with your foot at the same time.”

Breyer’s resignation is likely to touch off a battle over the composition of the Court, with special interest groups pushing certain nominees in an effort to make the Court “look like America.”  “You’ve got a black seat and three women’s seats,” notes University of North Dakota Law School professor Jeffrey Lukier.  “But there’s no psychedelic seat and no shred guitar justice either.”

Available in Kindle format on amazon.com as part of the collection “The Supremes Greatest Hits.”