Sister Agnesita Maria:  Will play the winner of the AL Central Division in best of five series.

“We understand that we compete every day with other forms of entertainment and spiritual growth enhancers,” the Pope said in awarding sainthood to Sister Agnesita Maria, a shy woman who taught sixth grade at various schools in Missouri and Iowa.  “Baseball and football have increased attendance and television ad revenues with the wild-card format, and I’d like to get a piece of that action.” 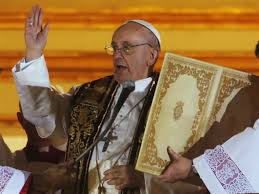 “What a career she had–and she did it all without steroids!”

The term “wildcard” refers to a competitive sports format in which a playoff or tournament berth is awarded to a team that has not qualified through normal procedures.  Wildcard sainthood is available to those who have primarily lead blameless lives but fell from grace on at least one occasion, thereby knocking themselves out of regular season contention.

“Would you keep Luis Aparicio out of the Hall of Fame because he slipped rounding third for the Red Sox in ’72 and cost them the pennant?” the Pope asked rhetorically.  “Of course not.  Same deal with Sister Agnesita Maria.”

Bowie Kuhn and Dock Ellis:  “I don’t care what Ellis puts on his head, Sister is suspended.”

Sister Agnesita Maria produced a string of spelling bee champions and choreographed a prize-winning polka dance team that racked up an undefeated record in the 1963 Central Missouri Parochial School Talent Jamboree.  She eloped with the pastor of her parish in 1970 and was suspended by Baseball Commissioner Bowie Kuhn, causing Pittsburgh Pirates pitcher Dock Ellis to wear hair curlers in protest.