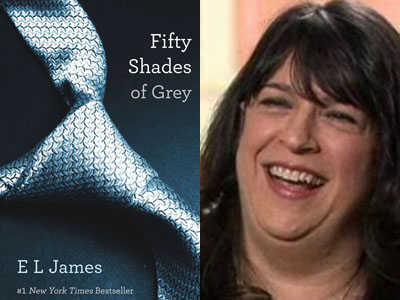 This woman may look like a simple author, who happened to have accidentally produced the world’s most successful piece of deviant fiction since the Bible. But the truth is, she’s far more than that.

She’s a goddess among the likes of Kristen Stewart, Angelina Jolie. The ultimate home-wrecking whore.

Admittedly, “Fifty Shades of Grey” isn’t quite as strong as it was earlier this year, but don’t worry…it’s still POISONING WOMEN’S FRAGILE MINDS.

Here in England, a woman is actually DIVORCING her husband, because he wasn’t willing to try recreating sex scenes from the book.

Yes, you read that right. An average every day British dude was  minding his own business, going about his normal day of wishing he wasn’t paying the equivalent cost of a small family car in Ethiopia just to travel three stops on his regular commuter train, when his entire universe was straight tipped on its own axis by a fad-obsessed slut-wannabe, who seemingly forgot the very consitution of marriage.

I mean, it’s a shame they hadn’t done their research a little better before they planned their big day, because if they’d shopped around, I’m sure they may have been able to find a minister who could have uttered the question “Do you promise to take this man, and love him unconditionally, for richer or poorer, until your dying day, or whenever you discover a pulpy piece of pornography which makes you want to have your nipples clamped, and your ass  stapled to a plank of wood, whichever comes sooner?” and then the poor chap may have had more of a heads-up.

Nevertheless, they went the easy route, booked through marriageministersinasimpletypicalasshitchurch.com, and now the poor fella finds himself having his entire marriage torn to pieces because his wife’s now decided she wants to be treated like a slut and called a “dirty bitch jizz-bucket.”  I’m guessing that’s the kind of chaos that goes down in its literary redundant pages.

The couple is being kept anonymous.  All we know at this stage, is the woman is a 41-year-old banker who makes at least £400,000-a-year.  And she read “Fifty Shades of Grey“ and proposed trying some moves from it to her husband.

But he thought the request to try things from the book was, “unreasonable” and blamed the book for the problems with their marriage.

After the “Fifty Shades of Grey“ fight, the woman finally decided things were never going to get better and she started the divorce process.

Of course, the wife was completely blameless in all of this. She’s the victim. Do you know, she once even bought sexy underwear to entice her husband into making love, but he never even complimented her on her appearance? What an absolute arse.

I’m sure she always made every effort while at home.

Of course she did. Otherwise, how could she possibly justify calling him “boring?”, and not instead accept that she simply got sucked into following a trend, and completely changed her expectations, and her marital goal-posts, like the trend following sheeple that she is.

One thought on “E L James Is Killing Our Marriages!”