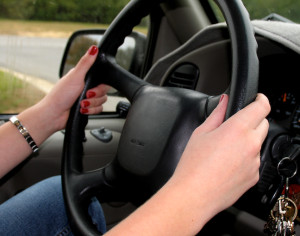 In my Sophomore year of high school, I, along with every other 15-year-old I knew, took Driver’s Ed. The class itself was easy. The driving, on the other hand – well, that’s the story you are about to read.

I’d see the elbows of the guys in the back seat and the snickers on their faces, and I would see the teacher slump his shoulders forward and shake his head, as I meekly mumbled – every day – oh, sorry, I  didn’t know it was already started.

One day, when I was behind the wheel, rain began pelting the window. Within seconds, I was driving through a thunderstorm. “Turn on your wipers,” my teacher commanded.

I had no clue where the wipers were or how to turn them on. So I looked for them as we veered off the road.

“Wipers! Wipers!” he repeated. I still couldn’t find them. The teacher, who was normally able to handle new drivers with a sort of calmness, began to panic. He reached over to turn them on for me and probably began to question his decision to teach Driver’s Ed.

If that experience didn’t frighten him, the following one did.

In the days before power steering when wheels didn’t return to their original position, my teacher led me down a street in a nearby neighborhood. As we neared the field that stretched across the block behind the neighborhood, I heard, “Turn right.”

In compliance, I turned right. But suddenly I was driving across the field toward the block of houses that sat beyond the field. And all I could hear was, “Put on your brakes. Use your brakes. Your BRAKES! YOUR BRAKES!”

As we came closer to the row of houses, I suddenly became aware of the family sitting at their kitchen table eating breakfast. Like deer in the headlights they watched the car propel toward their home like a speeding bullet. And then, just short of their back yard, brought out of my horror-filled state of shock, I slammed on the brakes.

My teacher slid down in his seat, relieved that we didn’t kill anyone. When I turned around to back up, I noticed the boys on the floor in the back seat, arms over their heads, terrified.

I think that was the last year my teacher taught Driver’s Ed. After that class, my driving improved, my reactions improved, and though everyone else in the car will remember me as the driver who almost killed all of them, the thing I remember the most about that experience was that I was the only student in the car – a girl – who knew how to parallel park!