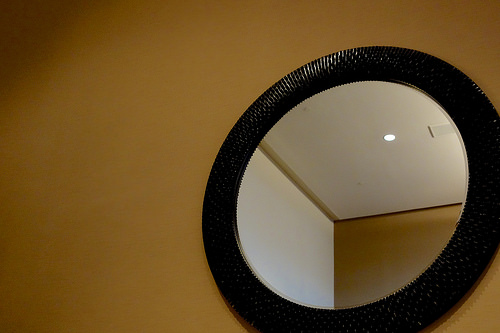 I don’t know why I did it.  I was half-asleep and annoyed, but that’s no excuse.  It was a pure case of mental age regression.  I don’t know any other way to explain it.

It was the middle of a cold, windy October night.  The super had not yet turned on the heat, and a traveling cold front had made it necessary to pull a wool blanket out of storage and wrap myself in it.  I had been sound asleep in my homemade cocoon until my bladder woke me up.  I lay in bed for a few minutes, until the situation became urgent enough to get up.  I unwound myself from the blanket, stepped onto the cold floor and made my way carefully to the bathroom in the dark.  I’m used to finding my way around at night when nature calls, so it didn’t bother me.  The wind made a whistling sound through one of my windows, and I made a mental note to ask the super to fix the freakin’ thing so it would close properly.

I switched on the light in the bathroom and did my business as fast as possible.  I was washing my hands when the bulb in the overhead light, which had been flickering, died and left me, again, in darkness.  I let out a big sigh and shook my head.  Then the ridiculousness of the whole situation hit me, and I began to giggle.  I remembered a game my sister and I used to play as teenagers, and, out of pure silliness, I looked into the dark mirror over the sink and said, “Bloody Mary! Bloody Mary! Bloody Mary!”

Nothing had ever happened when my sister and I played this crazy game, but this time I thought I saw a dark cloud form in the mirror.  The silliness ran out of me and chilly fear ran in.  I practically sprinted back to bed, as fast as I could in the dark without falling over something, got inside the sheets, pulled them and the blanket over my head and closed my eyes.  I was breathing hard, but I thought I was safe.

A moment later I heard a gravelly female voice say, “Okay, who the hell woke me up THIS time?”

The voice was followed by footsteps that made my floor creak and my breath come in little gasps.  I lay still in the bed, hoping that I looked like a pile of blankets.

“I know you’re there!” said the raspy voice.  “Come out and explain yourself!”

I lowered the blanket just enough to peek out.  I looked toward the bathroom door, and saw what appeared to be a tall, gaunt woman.  I couldn’t see her face clearly in the dark, but she was wearing some kind of bathrobe and her hair was done up in old-fashioned big rollers, over which she was wearing a hair net.

“I was having a great dream.  I was on a raft in the Pacific with Christian Bale and all he was wearing was a conch shell.  From that you woke me up!”

I tried to say something, but all that came out was air.

She stared at me for about ten seconds, then let out a huge laugh.

“You gotta be kidding!” she said.  “You’re old enough to be a great-grandmother!  You want to get married NOW?”

I was starting to get over being scared, because I was getting mad.

“Yeah.  They’re all wondering what they’re looking at!” she said. “You got a cigarette?”

“Yeah, there’s some in the fridge.”

She floated into the kitchen, turned on the light, opened and closed the fridge door and came back into the bedroom with a bottle of beer, from which she took a large swig, wiping her mouth on her sleeve.  The backlighting from the kitchen made her look even weirder than before.

“Hey, aren’t you supposed to be scary or something?” I asked.

She took another swig of beer.  “If there’s nothing else, can I go back to bed now?  I want to get my dream back.”

She disappeared back into the bathroom, taking the bottle of beer with her.  The next day, I took the mirror off the bathroom wall, smashed it and tossed it out.  I have never replaced it.