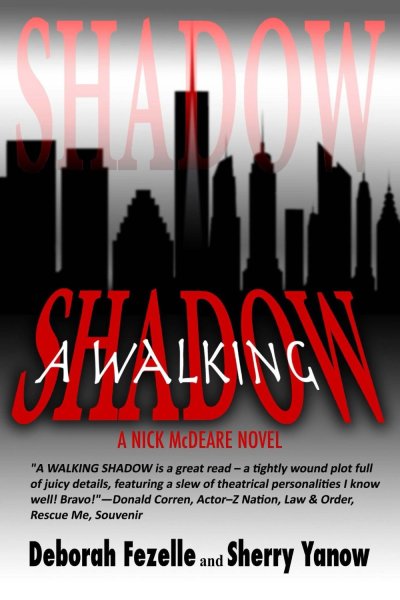 We are happy to post an excerpt from the newest release from Shorehouse Books A Walking Shadow, the mystery/suspense novel, which is the sequel to An Evil That Men Do, written by talented duo Deborah Fezelle and Sherry Yanow.

Gianni Fosselli shot out of the house and sprinted after his son. Gasping for breath, he ran like the wind itself, his feet sinking into ground soggy with melting snow. He could make out the dog just ahead of Anthony, his silver collar reflecting the moonlight. The boy’s white scarf whipped behind him as he dashed for the fence.

And then Gianni saw McDeare on the other side of the barrier, yelling for Anthony! Lyle Barton was next to him, McDeare’s accomplice. Dashing towards her son, the boy’s mother materialized out of the darkness, the locked gate swinging open!

The faccia di merda would not lay one perverted hand on Gianni’s precious son. But first, he would silence the whore. Gianni thanked God his gun was loaded, swiftly turning the weapon on Jessica.

In the moonglow, Gianni could see McDeare suck in a breath as he realized the game was over. Gianni directed Anthony to call his dog. When the boy refused, Gianni raised his voice, ordering him to do as he said. The dog lowered his head, barking furiously at Gianni.

As Anthony finally complied, Gianni smiled warmly at his son. He thanked him in front of McDeare and Jessica, wanting them to understand at last how blood told. McDeare was an outsider here, no relation to Anthony Fosselli.

Cocking the gun, Gianni willed his trembling hand still, his moment approaching. He instructed his son to take the frenzied creature into the house. Now. He waited for Anthony to retreat so his father could do what was necessary. The boy played dumb. Gianni shrieked at him to run to the house!

Snarling, the dog leapt for Gianni’s throat. The gun fired, a bright flash–

Bolting upright in bed, Gianni Fosselli wiped beads of perspiration from his forehead.

Mio Dio, another nightmare yanking him out of his sleep.

It was a new day, the nightmare behind him. The man who now called himself Max Callaban, the man everyone thought dead, stepped back and surveyed his handiwork. The most important room in the house was finished, all in blue. His son’s room. Satisfied, Max turned out the lights and headed downstairs. The Victorian house was coming together bit by bit. Passing a gilded mirror in the lower hallway, Max paused, his new image looking back at him. A shaven head, his swirl of dark hair gone. Green contact lenses, his brown eyes erased. He threw back his shoulders. He looked fit. He didn’t look like Gianni Fosselli. Not anymore.

There was nothing like restoring an old house to get you back in shape. Especially a house with a personality of its own. The old Victorian rang out with random echoes of laughter. Windows sagged open in the middle of the night. Cold spots leaked. And that haunting recurring dream—racing after Anthony into the yard. McDeare and his cohorts on the other side of the fence. A dog. Dogs were a filthy nuisance … Max chuckled. His imagination was too vivid. The place had character, that’s all.

Max poured himself a grappa from the living-room bar. Strolling onto the front verandah, he surveyed his property, five rolling and leafy acres in northeastern Ohio. The land stretched out like the mid-Atlantic, the autumn foliage a confetti of rust and sienna and pumpkin and mustard. The sun was beginning to sink, turning the pond molten silver.

It was peaceful here, the perfect place to raise a seven-year-old boy. A place with stable family values, as America called it. People went to work at eight every morning and returned home at five. They attended church on Sunday and said grace before dinner. They celebrated the changing of the seasons and the holidays, just like their parents and grandparents before them.

Ambling back indoors, Max headed for a glassed-in side porch he’d turned into his office. He still had a few minutes before leaving. Sitting in front of his iPad, Max read THE NEW YORK POST’S gossip section one more time:

Beautiful stage and screen star Jessica Kendle will marry best-selling suspense author Nick McDeare in a New-Year’s Eve candlelight ceremony at the Long Island mansion of famed Broadway producer William Rudolph. The guest list of over four hundred includes renowned political figures and Broadway luminaries. This will be the hottest ticket in town as New York City ushers in the New Year.

This is the second marriage for both parties. Mr. McDeare, a renowned former investigative reporter for THE WASHINGTON POST, has been divorced for many years. His son from that marriage died of leukemia. The author of five novels, Mr. McDeare has won the prestigious Arthur Conan Doyle Award and been nominated for a Pulitzer for his work at the POST. Ms. Kendle, a Tony Award winner, was married to Broadway star Andrew Brady until his murder two and a half years ago. She has a seven-year-old son. After nearly a three-year hiatus, Ms. Kendle is due to return to Broadway in a musical revival of TO HAVE AND TO HOLD.

In a twist worthy of any drama, Mr. McDeare is Mr. Brady’s long-lost older brother, given up for adoption at birth. The brothers were reunited via a phone call shortly before Mr. Brady’s death. Mr. McDeare was instrumental in the apprehension of Gianni Fosselli, his brother’s killer and the biological father of Ms. Kendle’s son. Mr. Fosselli later died at sea in an escape attempt from a cruise ship. During the course of his investigation, Mr. McDeare and his sister-in-law fell in love. Quite a coup for Ms. Kendle. Mr. McDeare, long considered a confirmed bachelor, has left behind a trail of broken hearts. Apparently, he just hadn’t met the right woman until now.

Max stared at Jessica’s cut-crystal features, the sapphire eyes smiling into the camera, spun-gold hair framing her face. An angel’s face. Nicholas looked the devil next to her, amber eyes fierce under knit brows, strands of ebony hair spiking his forehead. Max’s gaze shifted to the little boy in a framed picture on his desk, his dark curls and cleft chin a mirror image to Max’s at that age. Only the boy’s eyes were his mother’s, blue jewels that changed colors with his mood.

“Mr. Callaban?” Carlo Nori stood a few feet away. “I brought the car around. Whenever you’re ready.”

“I’ll be there in a moment.” Max motioned. “My bag’s by the back door.” Carlo was a connected man, part of Roberto Martinelli’s extended family. He’d been sent by the crime boss to protect Max.

Dropping the iPad into his briefcase, Max slung the satchel over his shoulder. He reached into a drawer and grabbed a small box. His calling cards, the primary reason for this brief trip. It was time to set the dominoes in motion.

It was a brisk autumn morning, a light wind churning the inlet. Roberto Martinelli strolled along the pier of his Long Island estate, a Cuban cigar clamped between his teeth. He loved the change of seasons, the never-ending cycles of life and death.

A reedy man with slicked-back hair hurried across the garden’s expanse. Aldo Zappella clapped Roberto on the back. “So, how was Jersey City?”

“Excellent. The camera I ordered arrived. A Canon, cost a fortune. They were practicing with it when I got there. And the girls insisted on modeling the special wardrobe I ordered from Italy. Another fortune.”

“But it gives you pleasure.”

“True.” Aldo knew Roberto well. And he never judged. He was too loyal to judge.

“So how did they look in these designer clothes?”

Cupping his fingers to his lips, Roberto blew a kiss into the air. “Perfection.”

“Now,” Roberto spit a piece of tobacco to the ground, “what’s this important news you have for me?”

“Fosselli arrived last night to work out the details. He wants to take the kid at the wedding.”

“In the meantime, he wants a glimpse of his son. And what he didn’t tell me was he plans to fuck with McDeare. He asked too many questions. His hatred’s eating him up.”

“Poking a sleeping rattlesnake.” Roberto shook his head. “I’d hoped Fosselli was smarter than that. Now we need someone to watch McDeare.” Puffing on his cigar, Martinelli paced towards the water. “Get Clint Vaughn.”

“Vaughn’s a chameleon. No one sees him. And keep Fosselli in line.”

“You want Carlo should report to us?”

“Fosselli and I go back too far. He’s an honorable man. We deal with Fosselli directly.”

“Roberto, there has to be someone better than Vaughn. Anyway, he’s semi-retired.”

“He’s been semi-retired ever since he got his PI license. Vaughn’s natural habitat is a bar and his main diet is a bottle of scotch. But the lazy SOB always comes through for me, and he loves money. I don’t want any screw-ups this time. Not with McDeare.”

Hands stuffed in his pockets, Nick McDeare clipped home, the late afternoon sun warm on his face. Rounding East Seventy-Fifth Street, Nick headed towards Fifth Avenue. The Brady brownstone rolled into view, slate gray and neatly framed by a ribbon of black wrought-iron fence. Nick flicked the gate open, catching a speck of trash on the front steps. He bent down to pick it up.

It was a matchbook. And not any matchbook. This was a refugee from Oceano, Gianni Fosselli’s former restaurant, playground for the rich and famous. Now extinct, like Gianni.

Nick turned the familiar matchbook over in his hand, a drawing of a cruise ship set against a tropical sunset. How did this particular book of matches home in on this particular brownstone?

Trying to ignore the kick to his gut, Nick brushed a hand through his hair. Okay, someone who used to frequent the restaurant and lived in the area accidentally dropped the matchbook on his way past the brownstone. It blew onto the stoop. New York City streets were littered with trash and packed with pedestrian traffic. No big deal.

Pocketing the matches, Nick fished for his keys and turned the locks.

From behind a Victorian lamppost down the block, Max Callaban smirked at the shock on McDeare’s face.

This was just the beginning of his hell.

Custom made for Nicholas McDeare, Max Callaban was adding a tenth circle to Dante’s nine.