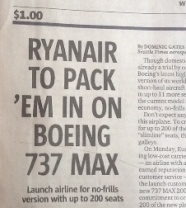 Boeing is now selling a plane called the 737MAX200, which sounds like one of those high-alcohol drinks in the big threatening cans you see in 7-11. This puppy really packs ‘em in, having 11 more seats than the standard 737. So the new plane will “seat” up to 200 people. How do they do that, you ask? Primarily, by getting rid of the galleys that hold food.

It’s time to grow out those fingernails.

But another change allows the plane accommodates more seats. Grab a Zip-Loc and pretend it’s an air sickness bag, because this one will make you nauseous. The new “slimline” seats you’ll sit in are narrower. I rarely wear armpit deodorant because I live in a cool climate that lacks humidity. But when I fly I baste the pits with Degree® because I know I’m spending the next few hours with my arms pressed against my ribs.

Ryanair recently became the first customer to max-out with the newest flying cattle-car. Never heard of Ryanair? It’s a no-frills Irish airline that serves Europe and is rumored to have a customer service department manned by one pensioner who naps a lot. Its motto is “Erring, Go Back.” At a news conference in New York, its chief executive Michael O’Leary demonstrated how many customers total he thinks will be happy with the new plane: 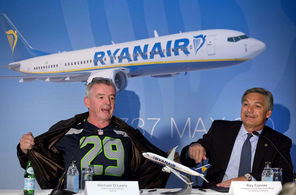 But Boeing rival Airbus isn’t sitting on its heels. They’ve announced a new plane that will accommodate 202 passengers, two more than the Super Max flying prison. And how will they do this? Through even better seat innovation. All the seats on the forthcoming Airbus EuroMax202 will look like this: 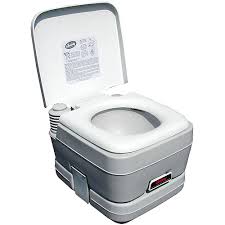 On the plus side, there’s no more fighting your way to the aisle when that $10 Meat Box turns against you. And you knew it was just a matter of time before the private restrooms bit the dust, right?

3 thoughts on “Folks, We Have Some Rough Air Ahead”