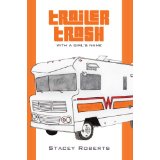 An excerpt from Stacey Robert’s funny and critically acclaimed book Trailer Trash With A Girl’s Name which is available on Amazon.com in both print and Ebook.

After four decades, I have come to terms with it. I have a girl’s name.

I spent much of my childhood trying to figure out two things:

1. How did I get stuck with it?
2. What should I change it to as soon as I possibly can?

Right around puberty, I decided that the second item was way more important than the first. I needed the manliest of man names to go with my deepening voice and sudden werewolf-like hairiness. I hoped that if I came up with the right one, my mother would finally give in and say, “That’s it! Perfect! Let’s go to the courthouse and get that thing switched right over.”

But she had an answer for every suggestion I made:
1. Dirk Steel (Too metallic)
2. Duke Rottweiler (That’s a dog’s name)
3. Wolfgang Hammerstrike (That’s a wolf’s name)
4. Gunnar Ironcannon (We’re not Vikings)
5. Layne (That’s your brother’s name. What is wrong with you?)

My mother tried to be supportive.

Mom: “SSSSSStace, there are lots of men named Stacey.”

Me: “There are five billion people on the planet, Ma,” I said. “Half are men. How about even one more?”

My mother never even really explained why she named me Stacey. The closest I ever got to a reason was, “I thought you were gonna die.”

South Plainfield, New Jersey, circa January, 1971. My mother stubbed out her last pre-natal cigarette. A tired nurse walked on soft-soled shoes into the emergency waiting room at Muhlenberg Hospital.

Sheila the Nurse: “Mrs. Roberts, we can take you back now.”

Sheila the Nurse: “Now, now. We don’t know that for sure.”

I was at least two months early. If I had come on my original due date, I would have been born around the same day as Layne the Favorite. That would have been a real time saver:

Me: “When do I get to have a birthday party?”

Mom: “SSSSSSStace. It was a party on your birthday. Why are you always complaining?”

Me: “He got all the presents.”

Back in 1971, my mother walked slowly down the hallway of the hospital, her nurse beside her, holding her by the arm.

Mom: “That’s nice. Do you have children?”

Sheila the Nurse shook her head.

Mom: (diving right in) “You HAVE been married, haven’t you?”

Mom stopped short and looked Sheila the Nurse up and down, her lips pursed. This was her classic look of contempt. Sometime during the Reagan presidency she added little half-moon glasses she could peer over disdainfully, completing the look.

Mom: “How did THAT happen?”

By the time of my wedding in 1993, both my mother and my father had each been married four times. My dad, at the ceremony, suggested that he and my mother should just re-up with each other and make it five. At that time, Mom was married to Marvin, King of the Jews. He did not warm to the idea.

Me: “Marvin, my dad just said the weirdest thing.”

Marvin, King of the Jews: “That son of a bitch.” (This was my mother’s pet name for my father)

Marvin, King of the Jews: “You know he asked your mutha to dance?”

Marvin, King of the Jews: “Sweet? Do you know what an insult that was to me?”

Me: “Everyone knows, Marvin. So he thought it would be a good idea if they just got married to each other for the fifth time! Funny, right?”

Me: “Wow, your face is really red right now.”

Me: “That’s some eye twitch you got there. Are you winking, or having a stroke?”

Me: “You totally crushed that wineglass you were holding. There’s a big chunk of glass stuck in your palm. Let me get some help.”

My bride was an emergency medical technician, so I went to tell her that Marvin, King of the Jews, was hemorrhaging. Neither of us had eaten yet, even though it was our wedding day, so she was not in a good mood. Between the emergency patching up of Marvin, King of the Jews and the guilt that came from having both Jewish and Catholic guests at the wedding (we had to stop and see all of them), neither of us got so much as one bite of the expensive dinner our parents had fought over:

Mom: “SSSSStace. This place where the wedding is. They better have a kosher meal, Buster. You know we have to have kosher. Kosher!”

After nearly two decades of watching my family eat cheeseburgers and patronize restaurants that did not stringently follow the Old Testament Cookbook, I figured kosher was way less important than, say, the open bar. But I played along and talked to the wedding planner, Mike.

Me: “Mike. As I may have mentioned, there is a horde of angry Jews expected to attend the wedding. Their queen has demanded a kosher meal be added to the menu.”

I had a note my mother had sent along for this meeting. I opened it.

It said:
FISH!
Your Mother

Mike the Wedding Planner: “We can do fish.”

There was now a choice between grilled halibut and London broil on the menu. All of the Catholics ate the fish and the Jews ate the London broil. The bride and groom ate nothing, although we had consumed a large quantity of soothing brown liquor. Later that night, after leaving the reception, where all the food was, we had to go to a 7-11 convenience store and get some cheese and cold cuts for our wedding dinner.

Although undernourished and under the influence, thanks to the bride, Marvin, King of the Jews did not bleed to death.

Kim: “What the hell happened?”

Me: “He crushed the wineglass he was holding.”

Kim: “What is it with you Jews and breaking glass at weddings?”

Me: “It’s not a religious thing. I think he’s mad because my dad didn’t want to dance with him.”
She sprang into action. Marvin, King of the Jews told her the whole sordid tale while she fashioned a pressure bandage from a linen napkin and plucked glass shards out of his hand with some tweezers that she borrowed from Skanky Bridesmaid Number Two.

As it turned out, my mother and father did not remarry each other. My broken home endures.

Sheila the Nurse: “The doctor will be here any minute. Are you still having contractions?”

Mom: “I keep telling you. SSSSSSSStephanie –”

Sheila the Nurse: “The baby’s only a couple of months early.”

Mom: “SSSSSSSarah. Are you listening to me? It’s got no lungs. Do you think a baby can live without lungs?”

Sheila the Nurse: “Let’s just wait and see what the doctor has to say. Is your husband on his way?”

Mom: “That son of a bitch? No way. He’s probably playing the ponies somewhere.”

Sheila the Nurse: “Do you want to call him?”

Mom: “What for? He’s not gonna wanna come see the baby. It’s gonna die. No lungs. SSSSSSShirley. How long you been a nurse?”

She called my Aunt Sissy, who was at home babysitting Layne the Favorite while my mother was at the hospital.

Mom: “Sis. It’s not cooked all the way. Its organs aren’t formed. How come no one understands that? This is a shitty hospital. It’s disgusting. SSSSharon. Why is this hospital so shitty?”

Mom: “What did Layne eat for dinner? Are you keeping him clean? He hates to be dirty. Just bring him here.”

Sheila the Nurse: “I don’t think this is the best place for your other child.”

Mom: “SSSSSSally. Listen. He’s my son. He should be with his mother. Sis – just bring him. Ow. This thing hurts. Selma. What the hell is this?”

Mom: “Contractions? I never heard of this facochta contractions.”

Sheila the Nurse: “Didn’t you say you have another child?”

Sheila the Nurse: “Is he adopted?”

Sheila the Nurse: “Was he delivered by a stork?”

Mom: “A stork? What are you talking about? Ow. What the hell is going on? Get this thing out of me.”

Sheila the Nurse: “You didn’t have any pain at all with your other child?”

Mom: “Not a bit. I told you, Sheera. There’s something wrong with this one. I think it’s trying to eat my lungs because it doesn’t have any of its own.”

Sheila the Nurse: “So maybe it’s not going to die if it has the strength to eat your lungs.”

I weighed two pounds, three ounces. I was cleaned up, swaddled, and plopped straightaway into the incubator.

Mom: “What good is that gonna do? Is it gonna grow his lungs back? His organs? His cells?”

Mom: “Suzanne. Let me ask you a question. Did you go to nursing school in this country?”

Sheila the Nurse (wheeling my incubator out of the room): “He’ll be in the ICU if you want to come see him. He may be there for awhile.”

Mom: “My sister is bringing my son to stay with me until I can go home.”

Sheila the Nurse: “Do you want to name him? We should put something on the card other than Baby Boy Roberts.”

Someone from the hospital records office brought the form to the room for her to fill out. My father wasn’t there, so she filled out his part too. Later, I’ll be glad that it doesn’t say: FATHER: Son of a Bitch.

My mom got stuck on NAME:

Records Orderly (with a smile): “Trying to decide?”

Mom: “No. I’m trying to remember that nurse’s name.”

Mom: “Right. I knew it was something like that.” She wrote on the official State of New Jersey form:

I came home from the hospital two months later. Because of Layne the Favorite’s second birthday, no great fuss was made over me. I didn’t know any better, so I cooperated: I was quiet, probably because my lungs weren’t fully cooked, and unlike my brother, I was content to lay in my own filth.

As I got older, I grew less cooperative. I was so angry about my name. I’m sure I would have been happier with the hospital’s original plan for me – BABY BOY. Would I have gotten teased any less? Doubtful. But with a name like that, maybe I could have had a career as a rapper or a 1920’s gangster. Do banks still get robbed with tommy guns, or do I have to do it 21st-century style, where I hack in and steal a penny from every account in the bank? If that’s the case, I guess it wouldn’t matter if my name was Suzie. Or Sheila.

To this day, I still let my mind wander, thinking of good, strong, manly names. Names that make me sound taller and less doughy, with a firm, resolute hairline and a stunning anatomy.

If my children had been boys, I would have given them right and proper names, that’s for sure:
“Hawkwing McKiller Roberts, you stop playing with those dolls right now!” or “Stonecrusher Flint Roberts, don’t let that kid take your toy from you. Knock her teeth out! They’re just the first set anyway!”

As it turned out, I had girls. I knew just what to do.

I gave them girl’s names.