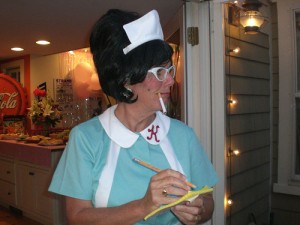 The TUMS aren’t working. The after affects of one of my worst diner experiences ever are still being felt. I was warned I’d be sorry I didn’t agree to the usual haunt. But did I listen? Nope. I wanted a classic diner tuna on rye, a side of fries and a shot glass of slaw with a dill pickle wedge served up old style.

That’s what I got; old style. Like, past expiration old.

And I thought Hot Tuna was just a band.

I love a good Jersey Diner. Sometimes even the bad ones are enjoyable. They’re a trip. Exactly like what you see in the movies. No kidding. The guy who seats you is usually a shifty octogenarian. He looks disinterested and vaguely involved with the mob and usually there’s a frenzied female manager – probably the middle aged daughter of the owner – who is running around freaking out about something, maybe the size of the matzoh balls.

Then there are the waitresses. They are the best part. Each diner we frequent has one that is a caricature of herself and perfectly fits the model of “Jersey Diner Waitress”. They are salt of the earth, take no prisoners, six pack and a carton a day pistols. And some are just tired.

Hey – can you blame ’em? Waitressing is hard work. I’ve done it. I’m talking on your feet for hours, dealing with the asshat general public, burning the toast, resisting the urge to spit in the coffee, waiting tables.

So youz tink youz got what it takes to be a Jersey waitress? Let’s just see about dat. Read on.

1. Refer to groups of customers as “youz”. Otherwise, it’s not autentic.

2. Refer to individual customers as “Hon” or “Doll”. No intimate relationship required. Doesn’t matter if you’ve never laid eyes on her in your life. It’s “Hon”. They won’t feel any closer to you and it might even result in a smaller tip because to some, that awkward false sense of familiarity is a little unsettling and off-putting. But go for it anyway. You’re a Jersey diner waitress!

3. Try not to clean your finguh naiyuls. If yuz wanna be flirty, yuz gotta keep ’em dirty. It shows your sense of dedication to the job that you don’t slow down for extraneous mundane tasks such as washing your hands. Sure it’s gross, but people will respect you for it.

4. Always carry drinking glasses by the rim. You don’t got time to worry about how you get ’em to the table. Just get ’em there and slam ’em down quick. Always keep it classy.

5. Always let ’em see yuz sweat. If the kitchen’s backed up, Big Nick just sat a 10 top in your section and you’re feeling over extended, make sure that you let all your customers know how frazzled you are. Go as far as to get a little cheesed off when they ask for the mustard. They like that. Sharing your stress only bonds you to your customers. And they will remember you for it. They might even put in a word for you with the manager on their way out. Though, I can’t guarantee what that word will be.

6. Try to act as tired and disenchanted – even put off – as possible. This makes the customer appreciate how hard you’re working. Because nothing says “Leave me a sizable tip” like letting the world know you have a chip on your shoulder the size of your serving tray. And just as heavy.

7. Stand out from the rest. Assert your personality. And by that I mean when they ask you if there are any specials, point sarcastically at the menu. Ditto, when they inquire after the dessert selections; point laboriously at the case while pedantically mentioning that “They’re over theyuh.” That’ll learn ’em, the rubes.

8. Don’t waste your time checking on your diners after their food arrives. By all means, wait until they either wave their arms wildly in your direction or just sashay on by in time to clear the plates. If you ask ’em how the food is right after they get it, you might have to get ’em something, and that just cuts into the time you have to spend with your other customers. Drinks empty? Hey – nobody told ’em to suck it down in record time, right? Don’t like their food? Just take it off the check. They filled up at the salad bar anyway. It’s not your problem. The last thing youz need is some wise guy bustin’ your chops over the chops. Get ’em outta theyuh so youz can get another table full of numb-nuts to tip you. Whatevuh.

9. Don’t memorize the menu. Have youz seen those diner menus? They’re YUGE! Whaddya wanna waste your time memorizing one for? What you don’t know won’t hurt them. You know what I’m talkin’ ’bout? Just make ’em point at what they want. Make ’em tell you the numbuh. What’s the vegetable today? You just smile and say – no, wait! don’t smile – blows your image. Just say “I dunno.” What’s the soup? Follow that dumb query up with “I’ll go aks.” You don’t need to check that shit when the apron goes on. Get the 411 from the kitchen when somebody aks.

10. When it comes to the check, leave ’em hangin’. Will they get the check and when? Remember, you are in control. You’re at the helm of this ship, Madge, so go have a cig and give them a little time to savor those last moments of atmospheyuh. Oh – and when they aks for the dessert that comes with the lunch special (because you’re certainly not volunteering this information), list ’em off by rote in a tone that lets ’em know they’re boring you to tears. They’ve been here before, the morons. It’s pudding, ice cream, a brownie or a cookie. Get with the fucking program already. They want their food boxed up? Bring ’em a couple styrofoam containers and a bag and call it a day. You don’t do windows, pal. Stick to your guns. You’re a cowboy – just like Bon Jovi. Remember that. 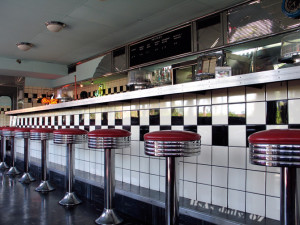 10 thoughts on “So Youz Wanna Be a Jersey Diner Waitress?”