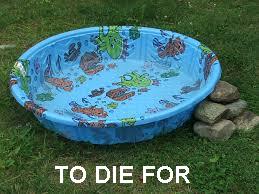 When I lived in Portland, Oregon I had a friend who lived in a sketchy neighborhood. One day we were sitting out back when we heard a pounding on the front door. We walked through the house, opened the door, and saw the neighbor who lived directly behind my friend’s house.

He was a gangbanger-wannabe dressed in jeans shorts, a wife beater, and a baseball hat set askew on his head. He had a chain around his neck that was thick enough to double as an assault weapon. And he wasn’t here to borrow some Grey Poupon.

“I want my kiddy pool back,” the guy barked, staring at us through beady, unblinking eyes.

My friend and I looked at each other in confusion.

The neighbor cocked his head and said, “No, that’s mine, and you stole it.”

He crossed his arms, making sure to pump out his pecs by pushing up on them with his buried fists. How you get a zit on a pectoral muscle is beyond me, but he had one. Probably by getting you water shut off.

My friend looked at me. I shrugged and said “Let him have it.”

My friend concurred. He knew that his Tough-Guy-Neighbor problem was similar to the one I had with my neighbor, whom I’d dubbed Bruce Hard-Lee. This guy had two screaming pit bulls chained out back and he taught karate lessons in his garage.

The approach you took was simple –you just waited until the rent came due and these guys simply disappeared. Like my neighbor did one morning, just before the end of the month (Gandhi knew this and used it to formulate his theory of nonviolence. As a younger man he was a debt collector, so he knew that with individuals and nations alike, anger management issues and financial discipline rarely go hand in hand).

I walked to the yard, grabbed the pool, and gave it to the guy. As he left with it my friend said, “If you happen to lose this one, they’re $4.99 at Kmart.”

Our response seemed like a good idea. No point inflaming tensions and maybe getting shot over a crappy piece of plastic.  I’ll take a hit to my pride over an absurd death anytime.

I sometimes wondered what happened to that guy. I think now I know. The other day I read about a guy in Tennessee who had an imaginary beef with his neighbors. The neighbors came home one evening to find him pouring gasoline on their front porch. They watched with alarm as the guy leaned over and lit a match.

But the flame ignited the fumes wafting up from the pool of gasoline. His clothes caught on fire. He tried to do a drop and roll, with limited success. Then he got up and ran away with flames surrounding his head.

The police declined to name a suspect, only saying that he’s still at large. But he shouldn’t be too hard to find – he’s the screaming guy who looks like a torch that escaped from a tiki bar. And he’s racing home to dunk himself in his kiddy pool.

Funny how anger and revenge always seem to backfire.

7 thoughts on “That One Neighbor”