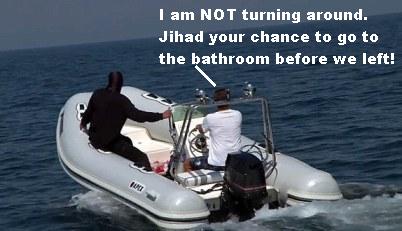 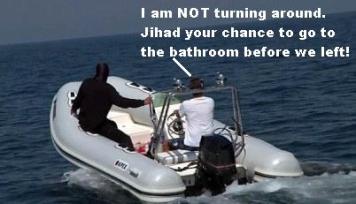 A conservative “filmmaker” recently set out to prove how “weak” security is on America’s border with Canada. So he dressed up as an “Ebola-infected ISIS terrorist”, crossed Lake Erie on a boat, and then walked into Cleveland unopposed. This, the filmmaker believes, should shock us.

I’m not shaken at all because I know why he wasn’t apprehended. Have you ever been to Cleveland? According to a Midwestern friend of mine, its nickname The Mistake On The Lake is well-deserved. So, authorities probably looked at the guy and said “Glad you’re here, dude, go for it.”

It failed to gain much attention because border guards correctly surmised that OBL was dead. They figured the “filmmaker” was just a University Of Brownsville fraternity pledge performing a Hell Week prank. 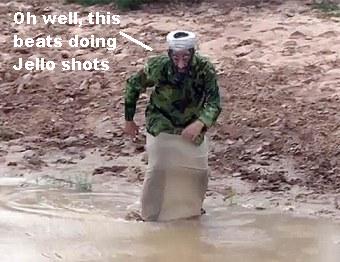 But our Spielberg Of The Border has given us an idea on how to counter ISIS. Yes, President Obama is building some coalition where Western nations will bomb away while other countries “help”. Remember The Coalition Of The Willing that Bush organized to support his Iraq invasion? It included such heavy-hitters as Palau and Solomon Islands (“Yes! Palau is now on board! They’re sending five guys with blow-guns!”). Those countries were totally Willing — to accept fat foreign-aid checks in exchange for being cheerleaders.

Been there, done that. We need some new thinking here. So what’s the one thing we do know about these knife-wielding crazies? Yup, they always wear those black facemasks.

They sure do love their facemasks.

So here’s the plan: CIA agents track down ISIS’s main facemask suppliers. They taint the next shipment with Ebola. And the next time some guy is ranting and raving while filming a YouTube video he’ll suddenly stop and shout “Why in the glorious name of Allah am I bleeding from my eyeballs!!”