In the fifties when the madness of dance
descended upon the youth of the land,
enflamed by images of other teens
flickering across TV screens 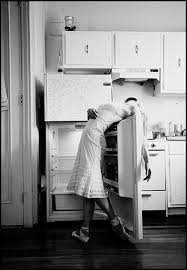 from Philadelphia, of all places,
practice was essential if perfection
was to be achieved, and a necessity,
since able males willing to serve as partner 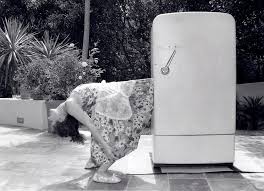 were in short supply.  It was as necessary
as a pessary had been to their mothers
for girls to practice their steps holding
on to the handle of a refrigerator.

Stoic, stolid, the appliances stood
doing their duty as men would,
allowing the girls to shine; after all,
a fridge is just an appliance.

I wonder what passions pulsed
through their Freon tubes,
trapped beneath their skins of
avocado green, harvest gold and white. 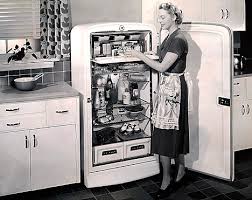 To feel the warmth of a girl’s hand upon
their handles, tiny lights unlit within; up
in their freezer compartments their brains
frozen like those of boys they stood in for.

For the duration of a 45 rpm record, they might
believe themselves beloved, but of course
nothing would come of it.  The most
morganatic marriage Faulkner could dream of

did not contemplate that an icebox
would lose its cool over
a gamin’s brown locks.  And
as for those girls, now long grown,

let us hope they have men
as solid, if less cold, and capable
in their domestic dealings
of better expressing their feelings.

One thought on “Dancing With the Refrigerator”