FRAMINGHAM, Mass. It was, many on the scene said afterwards, a situation that simply got out of hand. Rival gangs had assembled outside the Barnes & Noble bookstore here last night for a verbal “cutting” contest, a battle of rapier wits instead of stiletto knives. 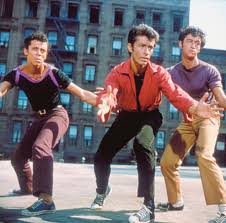 “It was the Subjunctives versus the Double Negatives,” said Tony Delfanzo, a sales clerk at the Best Buy store several doors down who watched the action while on his smoking break. “You could see them kids milling around out there, conjugating irregular verbs–you knew it was gonna get ugly.”

The two gangs were approaching each other when Dom Savio, a neutral and a lineal descendant of the Italian boy who is the patron saint of goody-goody kids who break up playground fights, stepped in to halt the violence. “Please–do not fight,” the 16-year-old announced to the crowd of angry young men. ”Each of us are capable of great things.” 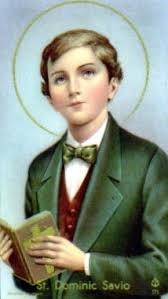 Accounts differ as to what happened next. Injured gang members say they began to disperse, but two security guards said they felt compelled to intervene. “It isn’t ‘each are,’” said Floyd Aucoin. “‘Each’ calls for the singular, so it’s ‘each is.’ I may be a mall cop, but that doesn’t mean I’m not illiterate.”

With that, Aucoin and his partner Neil de LoPresti waded into the crowd with chemical mace and Tasers. “Drop the dangling participles and nobody gets hurt,” Aucoin shouted through a bullhorn, setting off a mad scramble for cover, then a law enforcement reaction that some observers said was excessive. “It was a simple subject-verb disagreement that went horribly awry,” said Marie Rosen, who watched from the window of the adjacent Starbucks. ”Several boys were bleeding from split infinitives.” 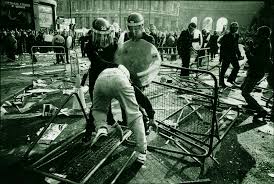 An investigation has been promised by local police, who say private “rent-a-cops” lack the training to respond to literary disturbances with the proper level of insensitivity. “People should feel safe when they come to a large chain retailer of books, music and videos, many of which contain a cafe serving Starbucks Coffee,” said Sgt. Jim Hampe. “Nobody should have to feel scared on a nice shopping trip out to buy a gangsta rap CD or a paperback copy of Fight Club.”