Skip to content
Recent Humor
“Re-Gifted” Children Get Second Chance to Disappoint
Japanese Omelettes and Other Great Uses for the Stupendous Egg
Botoxic
Ripping the Headlines Today, 9/26/22
I Wish You Loved Me as Much as Your Phone

BOSTON.  Mark Overton is about to complete the purchase of a pricey white-on-pink French-cuffed shirt at the Brooks Brothers store located in Boston’s financial district when Niles Howard, the salesman who is waiting on him, suggests that he add a $75 yellow foulard tie with miniature red and blue figures to complement it. 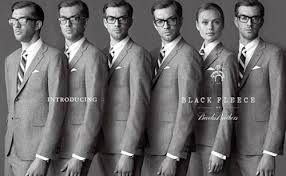 “This is a very fashionable pattern that is quite popular these days,” Howard says, but Trixie, a German shepherd who has accompanied Overton into the store, registers her disapproval with a growl. 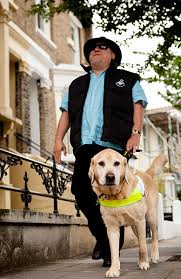 “I tried to stop him, but no–he just had to have a robin’s egg blue short-sleeved shirt.”

“What’s that Trix?” Overton says as he looks down at his constant companion.  The dog barks twice, and Overton attempts a translation.  “Red and pink don’t provide sufficient contrast within a single color group?”  The dog opens its mouth in what appears to this reporter’s eye to be a smile, and Overton pats her on the head and hands her a doggie treat.

“She’s a lifesaver,” says Overton as he pays the disgruntled cashier, who had hoped to add to his commission.  We leave the store together, and on our way out Howard snarls “Next time leave your dog outside,” to which Overton responds angrily by snapping “Discrimination against the handicapped is illegal!” 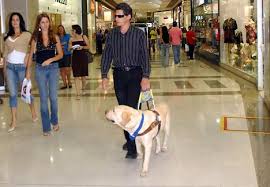 “Where did you get that skanky tank top?”

Overton, like many males, suffers from red-green color blindness as well as a general inability to coordinate colors when choosing his outfits.  “If I mix and match, I always clash,” he says.  “If I wear blue on blue, people tell me I dress like a bus driver.”

Trixie is a graduate of the Farkness School for the Colorblind in Watertown, Mass., where she underwent a rigorous six-month training course that taught her not only to identify potentially fatal color combinations such as yellow/brown and pink/red, but also such fashion basics as not to mix stripes with plaids.  “Trixie is a natural,” says headmistress Heidi Hagerty.  “We knew she was ready for her placement when she dashed into the street to save a woman whose skirt was hiked up in the back due to static cling.” 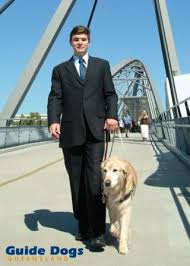 “When you look good, you feel good.”

Guide dogs for the colorblind still face resistance from some people who view fashion handicaps as less crippling than other disabilities.  “I don’t mind that dog coming in here if she sticks to the color-blind guy,” says Pete Famiglia of Napolitano Pizza on lower State Street down a block from the Brooks Brothers store.  “It’s when she barks at me for my tank-tops that I get mad.”