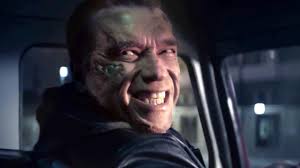 Well, he said he’d be back.

Terminator Genisys brings back “Ahnald” Schwarzenegger as a Terminator, who is continually sent back in time to kill someone who will eventually defeat a machine revolution, or to defend that person from another Terminator who’s sent back to kill … it gets very confusing.

Even more so in this movie, in which resistance leader John Conner sends his second in command Kyle Reese to 1984 to protect Sarah Conner, John’s future mom, in the past. It’s exactly what happened in the first movie. But this time, instead of getting there just after the original Terminator does, Reese arrives to discover that Terminator has been around for many years—and instead of killing her, it’s been protecting Sarah the whole time.

Then it gets complicated.

Reese, like the audience, flails around, trying to figure out what’s going on. Why can’t he can’t just blow away this oddly aged Terminator and get it on with Sarah? Turns out he’s John Conner’s father (Reese, not the Terminator), which comes as something of a shock to him. The timeline is fractured as the movie, and sometimes the characters, jump back and forth in time, blowing things up and generally causing chaos.

Just sit back and you may find, to your surprise, that it is enjoyable. Yes, there are logic problems along the way and moments that stretch credibility, but think of it this way: You’re watching a movie about time traveling robots. How much credibility do you really have the right to demand?

(Having said that, it’s never explained just who messed with the original timeline.)

Terminator Genisys is probably the third best of the Terminator movies, which according to some isn’t saying much. The cast and effects are first rate, and as popcorn movies go it’s one of the better ones. Emilia Clarke holds her own against the strong Sarah Conner actors who came before her, and look for J.K. Simmons as an older cop still reeling from a decades old involvement in a Terminator battle.

Best of all: Matt Smith, in a small role that made me smile like a loon every time he appeared. Casting a guy who played the eleventh time-traveling Doctor Who in a time travel movie was inspired, even if he didn’t get all that much to do. It makes me want to go write a fanfiction crossover.