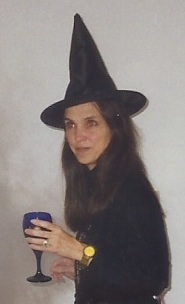 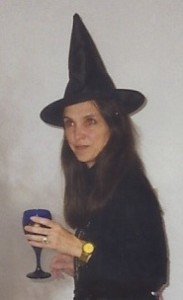 I can’t say for certain whether my wife is a witch or not, but I do know she charmed me when I first saw her and she does have a “weird sister.” (Sorry, Sissy. That’s just a little witches-in-Macbeth humor. No offense.) I also know that at least a few of Carolyn’s students wondered about her.

You see, Carolyn stood out as quite different in the Mississippi Delta, where we were both teaching college English. One of her son’s teachers—upon seeing Carolyn dressed in a black broom skirt, black turtleneck, long black coat, black scarf, black boots, and a black fedora—actually said, “You’re not from around here, are you?” Most of Carolyn’s wardrobe is indeed black. She looks great in this color, and she says her style is a holdover from her poorer days when she discovered it as a way to disguise how few clothes she owned. She taught in black clothing so much that even her freshmen noticed it.

So one day in English 102, a research-essay class in which Carolyn’s students were required to investigate some paranormal topic—say the Salem Witch Trials, for example—one student started joking around with her. This is when another student joined in the banter and cautioned his classmate not to “mess with” the teacher: “Haven’t you noticed she always wears black? You better watch your step, man. No tellin’ what she might do.” Although all of this was said in fun, the warned student did quiet down and become more subdued and started looking at Carolyn a little differently.

The very next morning as Carolyn was driving through campus, she noticed that one of the hundreds of tree frogs that plagued us had somehow gotten inside her car and was making itself an intolerable nuisance by hopping around like crazy. Quick-handed from swatting so many Delta mosquitoes, Carolyn was able to grab the frog, roll down her window, and fling it outside almost all in one motion. When she glanced to see its trajectory, she was dismayed to see it land squarely on a male student passing on the sidewalk. Then she noticed that the male student was the same one who had been warned the day before of Carolyn’s alleged preternatural powers. The look on his face was one of astonishment. He may have been wondering if the frog (or was it a newt?) clinging to his chest was an ordinary frog or was it a previously troublesome student now transmogrified. Carolyn, realizing how so many unlikely coincidences all converged in this moment, could not help laughing (what may have even sounded like cackling) as she rode away.

As I said at the outset, I don’t really know if my wife is a witch. All I know for certain is that she has continued to enchant me for over 25 years and that on this Halloween day in 2015, I am still—happily—under her spell.

17 thoughts on “My Bewitching Wife”