Skip to content
Recent Humor
This works but sometimes you need more than one cookie…
Hallmark Love
At the Preppy Headband Surgicenter
New Machine…
Special, New Holiday Made For President Trump Because He Is Special And New.

It happened last Saturday night. My wife and I were out to dinner with Sally and Jeff, two of our oldest friends, when my stigmata started acting up. At first I was able to hide it, concealing my bleeding hands beneath a maroon table napkin, but then Sally noticed a growing red stain on my shirt where, as they say in the old spiritual, they pierced him in the side. 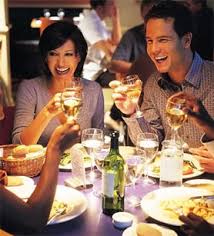 “What’s that?” she said as I tried to pull my blazer over the blood.

“That? Oh, I guess I must have spilled my malbec—I’m such a klutz.”

“You’re drinking beer,” Jeff said, and I was stuck. Thankfully, my better half sprang to my defense.

“It’s a medical condition,” she said with a tilt of her head that suggested to the other couple that I wasn’t the easiest guy in the world to live with.

“What is it?” Sally asked with an aspect of sincere concern.

“Stigmata,” I said as I stared down at my Caesar salad. I don’t like talking about myself. 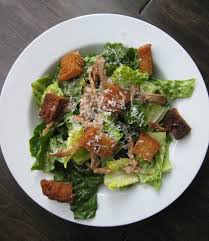 “Render to Caesar the things that are Caesar’s, and to salad . . .”

“But you have your glasses on,” Jeff said.

“It’s kind of a skin condition,” I said, trying to take the conversational helm so I could steer it towards calmer waters. “Hey–how ’bout those Patriots?”

But Sally didn’t let Jeff take the bait. “Don’t you think you should tie a tourniquet or something?” she asked as I bled profusely from the points where Jesus was wounded during his crucifixion.

“Are you on medication?” Jeff asked. He’s the kind of guy who thinks there’s a modern, scientific cure for everything. Hate to tell him, but the irrational is way underrated.

“No—there’s nothing you can do about it.”

“It’s a condition he’ll have to live with the rest of life,” my wife added.

“Well,” I began, “in retrospect I probably shouldn’t have been such an avid student of the Baltimore Catechism.”

“A bunch of Catholic hocus-pocus gave you a skin condition?” Jeff asked, incredulous.

“I . . . uh . . . probably studied a little too hard,” I continued. “I won highest catechism score three years in a row. I got a little plastic statue of the Blessed Virgin Mary every year.”

“Was there something in the plastic?” Sally asked.

“No, nothing like that. It’s just that, it laid the foundation for miraculous manifestations when I subsequently saved a guy’s life.”

“Were you a lifeguard?” Jeff asked.

“I was, so I learned mouth-to-mouth resuscitation, but I didn’t use it on some chlorine-bleached blonde in a tank suit.”

“Thank God!” my wife interjected, trying to lighten the mood a little.

“Instead, it was a junkie choking on his own vomit.”

“This was before AIDS. I didn’t think twice. I’d had all these First Aid lessons, finally somebody was giving me an opportunity to put them to use!”

The other three fell silent for a moment. The waiter came, cleared the salad plates and asked if we’d like another round of wine.

“YES!” the other three said in unison. I didn’t think the story was that gory.

“Yep. The EMTs said it was a miracle. So I had the catechism statues and a genuine bona fide miracle to my credit. I was on the fast track to heaven, and eventually sainthood.” 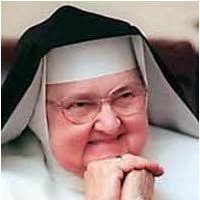 “If there are any Protestants watching tonight, we’re having a one-time Come to Jesus Special!”

“Wow,” Sally said. She just got tenure at a local college, and thus appreciates independent third-party validation of one’s accomplishments. “But—I thought you had to have three miracles to become a saint.” That’s what the Eternal Word Television Network has accomplished in the three decades it’s been in existence; put recondite dogma of the Roman Catholic Church just a click of the remote away from suburban Protestant infidels whose “ministers” allow them to take the entire summer off from church attendance!

“Two or three is standard, it’s up to the Pope,” I said, trying hard not to sound like a know-it-all. “But anyway, I was fine until last summer, when I saved another life.”

“Not another junkie, I hope,” Jeff said as he took a gulp of his cabernet. He’s usually a fastidious drinker, savoring the bouquet, the legs, the nose—the entire mystical body of his wine. I guess my story had him agitated.

“So what happened?” Sally asked, a bit breathlessly I might add.

“This kid was walking along, listening to music on his iPhone, earbuds firmly in place. He looked to his right, saw nothing, and stepped off the curb. What he didn’t see was a truck backing up from the other direction. The driver was looking over his right shoulder, and the kid was in his blind spot.”

“So what did you do?” Sally asked.

“I yelled as loud as I could—the truck driver heard me and slammed on the brakes.”

“How about the kid?” Jeff asked.

“Just kept on walking,” I said, to knowing looks and bobbing heads all around, as we are all parents of teenaged boys. 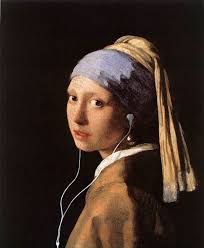 St. Catherine of Siena, listening to Breviary on Tape

“And ever since he’s had this . . . condition,” my wife said, as the entrees were placed in front of us.

“You’re in distinguished company,” the swarthy waiter with the big pepper mill said.

“You got St. Francis of Assisi, Saint Theresa of Avila, Saint Catherine of Siena—all had stigmata!”

“Still,” I said, “it can be very embarrassing in social situations—like this.”

“Isn’t there any way you can stop the bleeding?”

“Just one,” the waiter said with a knowing look. “If you think impure thoughts, the bleeding stops.”

“So . . . if he thinks of what we might be doing later tonight,” my wife began, but the waiter cut her off.

“No, madame. It is impossible to sin by thinking of having sex with one’s lawfully married spouse. He must think of someone else’s spouse.”

After the waiter departed, there was a moment of uncomfortable silence. After poking his grouper a few times, Jeff spoke in a magnanimous tone, like the celebrity auctioneer at a gala charity benefit.

“Well, you know, it’s . . . uh . . . all right with me if you think impure thoughts about Sally,” he said. He looked at her, she looked at him—then he gave her hand a little squeeze.

I turned to look at my wife, afraid of what I’d see, but instead of eyelids narrowed to grim little slits, I saw a look of . . . love . . . and compassion.

“I’m there for you sweetie,” she said as she grabbed my blood-stained hand. “Go ahead—think anything you want—if it’ll help you control this awful disease . . .”

“It’s not a disease,” I interjected.

“Condition,” she said softly. I could see tears welling up in her eyes that she fought hard to control, like Bagnell Dam at the Lake of the Ozarks, Missouri, after a heavy spring rain.

I looked at Sally, and she looked back at me with a smile. “Please,” she said with a therapeutic tone in her voice. “Go ahead—think of me what you will.”

Let me just say that I’m no saint. I have fantasies about women other than my wife—but not my wife’s friends. There’s just something—incestuous about the thought of relations within our social circle. As for Sally, she’s one woman I dearly love to talk to; interesting, educated, articulate—so no knock against her personally either. It’s just that—I couldn’t get it up for her, mentally speaking.

“Well, come on you two—get it on,” Jeff said as he stuffed a forkful of potatoes in his mouth. “If you don’t hurry up, our table is going to be drenched in blood before we get the dessert menus.” 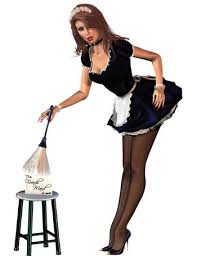 “We are almost out of lemon-scented Pledge, monsieur!”

I tried everything; French maid, naughty meter reader, Sports Illustrated swimsuit model, librarians on ice. Nothing worked. I could tell that Sally was a little hurt.

“Isn’t there some image of me in your mind you could find the least little bit sexy?” she asked finally, biting her lower lip.

And then it happened. Mirabile dictu—the bleeding stopped!

I gulped, then swallowed. It was time for confession. “To you, Sister Sally of the Talbots Skirt-and-Sweater Set—I offer my most passionate devotion.”

2 thoughts on “My Stigmata”