Skip to content
Recent Humor
Woke- The Black Seinfeld
I’m So Vein!
Touch Football Caps Practice Hikes, Adds One Mississippi
And if you look real close, you can see glasses that are not for you…
Cartoon: Hey, Turtle Boy, Did You Hear I Called You An Old Crow?

A cool Friday morning in June. I wade through the lighter-than-usual summer trash as I emerge from the Au Bon Pain at South Station bearing my large iced mocha latte–$4.46 with tax–and think about how different things were when I was a young legal beagle starting out in the practice of law three-and-a-half decades ago. Back then, a mocha cost sixty-five cents. On the other hand, my hourly rate was about what you’d pay for a kid to cut your lawn today, so I guess these things even out.

I stop at the curb before stepping into the ganglion of an intersection that was once called Dewey Square, but which was “re-branded” as Financial Center by some urban planning goober of the 80’s. I must navigate this deadly maelstrom–cars coming at me at high speed from four directions on three different streets–in order to get to my office. I look to my right and am surprised to see Rodrigo Ordonez, a matador on the American Express-Brooks Brothers Senior Bullfighting Tour.

Rodrigo Ordonez: Sorry, I can’t make tildes on the internet.

“Excusa me,” Ordonez says. He has apparently lost his “tilde” on his journey to America. “Is thees the famous intersection of Atlantic and Summer Streets?”

“That it is,” I say with smug provincial pride. “Also Surface Artery–you don’t want to forget that street.”

“Thees Surface Artery,” Ordonez asks, seeming puzzled, “how did it get its name?”

“It is so named,” I say with the polite patience that Bostonians are known for when explaining quaint and curious local customs to out-of-towners, “because it forms a surface on which vehicles travel.” 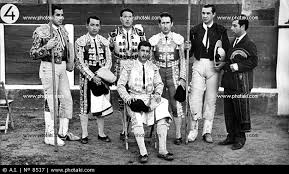 Ordonez seems confused. “But, so does every other street.”

“I know,” I say. “It is a mystery, like Virgin Birth and the Holy Trinity.”

“Si, senor,” hoping by the use of my rudimentary Spanish to put him at ease in our notoriously unfriendly city.

I hear steps and the sound of men running, and turn to see Ordonez’s cuadrilla–his team of helpers–rushing to join him.

“Senor Ordonez,” one of his picadores says, slightly out of breath. “We took the Red Line from Park Street, but you reached here before us.”

“Ah,” I say, admiring Ordonez’s strategy. “This was wise of you. In Boston, it is often possible to walk faster on the surface than to ride the subway beneath it.”

His cuadrilla looks at me in wonder. “In Boston, the legs of a human–they can go faster than the iron horse?” one of them asks.

“Si–again, this is a mystery for which there is no explanation.” It is my turn to ask a question of them. “What brings you here, to the Corner of Death, my friends?”

Ordonez gives me a look that speaks a volume–it is in fact Volume 4 of the Encyclopedia Americana, Birmingham to Burlington, which includes the subject of bullfighting. “So many reasons,” he says. “You are clearly a busy man. Shall I tell you them all, or are you called away by the siren song of the tiny print Terms & Conditions that must accompany every gasket and flange . . .”

“Don’t forget doo-hickeys,” I say, insisting upon the dignity that is rightfully due the American legal profession. “Please–my ears are all yours.”

One of his bandilleros steps forward with a sword to take a whack at me, but Ordonez stops him.

“Antonio–no! The ear may only be awarded by the presidente, the official who presides for the day over a bullfight. I am sure el abogado was speaking–how you say–figuratively.”

“Si, this is true,” relieved to know that I will not have to hold a handkerchief to my head all morning to stanch the bleeding from a hole where an ear used to be. “You were about to tell me why you have come to the most dangerous pedestrian intersection in all of Nuevo Englandado.”

“It is a constellation of reasons,” he says, his forehead plowed with furrows of seriousness. “First, los amantes des animals,” he says.

The caudrilla confers amongst themselves. “Pitas–like whistles?” one of them asks.

“No, People for the Ethical Treatment of Animals. They are lovers of animals, except the human kind.”

“Ah, si,” Ordonez says. “I understand. Second,” he continues, “there is the challenge. Even the strongest bull, it cannot compete with the Dodge Ram 1500 4X4 Pick-Up for best-in-class hydrodynamics, towing and payload, and exterior styling!”

“You forgot to mention the lifetime powertrain warranty!” I say, gently chiding him.

“No, there is one more thing–the most important of all,” he says as he looks off into the rising sun over the Atlantic. “Even the meanest bull–he is no match for the fury, the innate malice, the brute stupidity of your native beast.”

I know whereof he speaks. I look in the eyes of his cuadrilla, and I see–fear.

“Si, senor. I am ready for the ultimate challenge.”

“Well,” I say, taking a sip of my drink to steel myself for the gory spectacle that I’m sure is about to unfold. “You are a brave man.”

Ordonez is wearing a traje de luces, or “suit of lights,” and as he steps into the intersection the reflection of the sunrise creates a glare that blinds drivers trying to turn left on the Surface Artery. He has adopted a brilliant strategy–to disorient the raging toros de los roados, the better to prepare them for the kill. A crowd of taxis, delivery trucks and commuters slows to a crawl, and los banderilleros move in to place gaily-colored darts into the beasts.

Adolpho Reyes positions himself before a gold Toyota Scion, and plunges them into the car’s air filter, causing it to choke and gasp. Amy Nugent, a graphic artist on her way to work in the western suburbs from her loft in the Fort Point Chanel district, is outraged.

“Are you freaking nuts?” she screams at Reyes, but it is too late. La Faena de la muleta, or “the work of the cloth,” begins as Ordonez steps forward into traffic. He wields a sword beneath the red cloth known as the muleta, and Nugent is distracted. “That would look good in an ad campaign for . . . a bank . . . or a restaurant . . . or a set of high-end cookware,” she says dreamily of the brightly-colored instrument of distraction.

Ordonez moves in for the kill; he executes a derechazo, then a manoletina. Nugent weaves back and forth but other drivers honk at her, forcing her to face the matador squarely. He inserts the estoque–his sword–through her grille, cutting the cable that controls her hood latch. She is finished.

A crowd gathered outside a Dunkin’ Donuts bursts into applause and a chorus of ole’s, and Ordonez takes a low bow. He draws his sword and cuts through one of Nugent’s loopy earrings, and presents it to the proprietor of an illegal two-bananas-for-a-buck fruit stand.

“No, my friend,” the presidente says. “The goofy-looking piece of jewelry–it is yours.”

“Gracias,” Ordonez says, but Nugent isn’t through with him.

“That’s a hand-made earring I bought at a New Hampshire crafts fair!” she says, her face red with rage.

Ordonez sizes her up, just as he has taken the measure of so much other bull in his life.

“Senorita,” he says, his voice an iron fist of skepticism in a velvet glove of compassion. “You have traveled many miles to avoid the 6.25% sales tax of your native state.”

Cartoon: Hey, Turtle Boy, Did You Hear I Called You An Old Crow?

Cartoon: I Barely Know Them