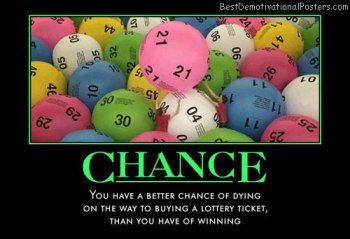 This isn’t about the NFL. It really doesn’t matter if Peyton Manning turns out to be the next Lance Armstrong because there’s a much bigger cheating scandal roiling America. I’m talking, of course, about the Hot Lotto scandal.

The Daily Mail is reporting that the information security director at the Iowa-based Multi-State Lottery Association recently got bagged for trying to rig a Hot Lotto game. That agency provides computers that randomly generate numbers for various lotteries. So, the information security director slipped stealth software into the computers to fix the numbers for a drawing in Iowa. He then went out and bought a ticket with those winning numbers. After winning, he deleted the software.

Yup, there’s more than one way to get that raise you deserve. And talk about having a set of powerballs – this is one bold ploy. Unfortunately, the guy couldn’t cash in his winning ticket because the Multi-State Lottery Association bars its employees from playing the lottery.

But why, you ask, didn’t he just give the numbers to someone else and split the bounty? Well, he did. Back in 2005 his brother won a Colorado jackpot. And a month later the information security director bought a new house.

This leads to the following conclusions:

* All throughout Iowa thousands of people are now saying “No wonder I never win!”

* You should always read your employee handbook. Especially before committing a crime.

* Never listen to your brother when he says “Hey, I’ve got a surefire way to make some big money”

* Lottery tickets are no longer a safe investment vehicle.

* In a case of supreme irony, this guy will end up selling lottery tickets from behind a 7-11 counter when he gets out of prison.

I remember distinctly the morning I walked down to 7-11. It was early, around 5:00 am. A car squealed into the parking lot and jarred to a halt. The driver opened his door, leaned down, and threw up. Then he marched into the 7-11 and bought four scratch tickets. He scratched each one right there, swearing and throwing the ticket to the ground when he didn’t win. Then he stomped out to his car and drove away.

Standing there with my doughnut, I knew that that was as close as I was ever gonna get to playing the lottery. I’m happy to just remain a spectator.