LONE JACK, Missouri.  Jim Ray Pfeiffer is, in his own words, a political Lazarus.  “Four years ago I was given up for dead,” says the perennial Republican candidate of his prospects in this bellwether state, with approximately equal numbers of registered voters from the two major political parties.  “I’m looking forward to quitting my job and entering public service in November,” he says with a gleam in his eye.

“We’ll probably cancel each other out, but voting is a civic duty.”

Pfeiffer is positioned to ride a political wave of tsunami-like proportions, as approval ratings of Democratic dog catchers nationwide are at an all-time low.  “I think the problem is Obama,” says Todd Wormke of the Canine Caucus, a consulting firm that advises liberal dog-catcher candidates.  “His pick for First Dog was a neutered male Portugese water dog.  Having your nuts cut off doesn’t exactly resonate with red state dog owners, and there aren’t enough Portugese voters in the heartlands to finish a chourico,” the spicy Portugese sausage.

Analysts will watch the race here closely because Central Missouri is viewed as the dog capital of America.  “Our most famous residents are dogs,” says Arnold Dundee, a Professor of Midwestern History at Chillicothe State College.  “There’s Old Drum, who inspired the phrase ‘A dog is man’s best friend,’ and Jim the Wonder Dog,” a Llewellin setter who could correctly predict the sex of unborn babies and World Series winners.  Jim retired after amassing a fortune in the soybean futures market. 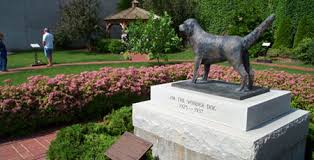 The nation’s only magazine devoted exclusively to coon and tree hound hunting, “Full Cry,” was for many years published in Sedalia, Missouri.  “Humans are so proud of their dogs’ accomplishments around here that they often neglect to accomplish anything themselves,” notes Dundee.

The office of dog catcher has historically been viewed with contempt by politicians, and used to demean an opponent’s chances as in the oft-repeated insult that a certain candidate “couldn’t get elected dog catcher.”   Under federal pets’ rights legislation, however, dog catchers will preside over the re-drawing of legislative districts based on the 2010 Census, which included a question as to the number and type of pets in American households for the first time.

“In some urban districts like D.C. dogs outnumber toddlers,” says Dundee.  “They could swing an election if you could get them to stop sniffing each other and vote.”