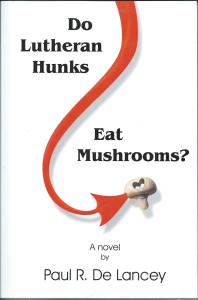 Excerpt from Chapter 1-A Loaf Of Bread 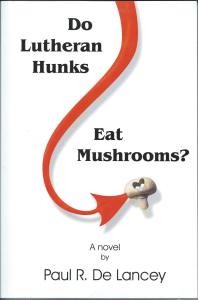 The tennis lady gave Joe a long look, her lip licking insinuating a wild hour of addressing and stuffing envelopes. “You know you really should try out for the Lutheran Chippendales.”
She waved goodbye, turned the corner, screamed, and was never seen again. Perhaps the bright reflections off the floor’s gold tiles blinded her, perhaps she got lost in Hungry Hank’s endless Lithuanian-food section, or perhaps she had talked too much and an enraged group of Ronald Reagan mimes got to her.
Joe brought his loaf of Roman Meal bread and pig balls to the Ten-Items-or-Fewer line. In front of him, a blood-splattered Young Republican, Hiram the Insignificant, unloaded the entire contents of aisle 6A onto the checkout counter. Joe thought about moving to the Eleven-Items-or-More lines, but he had only two items. And Lutheran discipline expressly forbade such chicanery. So for 2.9 minutes he dreamed of mushroom-free Thanksgiving dinners until his items moved up to the checkout lady, Deborah Devil.
The parchment skin of her face barely covered her skull. She sported a long bony nose that could double as a handy letter opener. Two golden horns emerged from the scraggly growth of her silver hair. The tip of a small tail swished just below the bottom of her dress. Hungry Hank’s sure took its role as equal-opportunity employer seriously.
Deborah Devil, or as The Supreme Evil preferred to be called, Debbie, did not permit Joe to see any of these demonic warning signs. He saw her as Shania Twain. Why a beautiful, fabulously successful singer worked the Ten-Items-or-Fewer line at Hank’s, he couldn’t say. But his heart pounded. And pounded.
No, some of that pounding came from his fist hitting the conveyor. Part of his brain had revolted against a grave injustice. “The customer in front of me had way more than ten items.”
Debbie sneered. “So?”
“It isn’t right. You should have directed her to another line.”
The evil checker pulled the plug to the cash register. “I don’t like your attitude.”
“That’s outrageous.”
She smiled and leaned forward. Damn, how come Hungry Hank’s let Shania wear her blouse so unbuttoned?
“Sure, hon, I know that. I wanted to get your attention ‘cuz Lutheran men make me so hot. And you’re all Lutheran.
“Tell you what, I’ll ring you up, Joe. All you have to do is be mine tonight, just tonight. C’mon, let Debbie make life fun for you.”
Joe sighed and in just two attempts averted his Lutheran eyes from her heaving breasts. “No, I love my wife. She’s the best. You’re great, but you’re not her.”
Debbie grimaced and pointed a claw-like hand–which always counted against her in beauty contests–toward the display of George’s Mushrooms. “Then buy those. Eat them. Then I’ll ring up your bread.”
“No way, mushrooms are the Devil’s food. I learned that way back in Lutheran Sunday school.”
Debbie’s chest heaved as she drowned out the store’s Lutheran love songs with laughter. “But that’s how I’ll make you leave your Episcopalian mushroom-cooking wife for me.”
Joe shook his head.
Shania licked her lips.
Joe gripped the Roman Meal. “The answer is still no, and I demand to talk to the manager.”
The horned lady rested her elbow on the platinum counter, her chin on her wart-encrusted hand. “Honey, no one manages me.”
A quite distant relative of Achilles came up behind Joe and asked Debbie, “Gonna serve anyone this century?”
Her red eyes flashed and the customer turned into a short monotoned economist. The man scurried away to explain the notion of constant elasticities of substitution to slow fleeing grannies.
One at a time, Shania fixed her eyes on Joe. “I’ll do the same to you if you don’t eat those mushrooms and leave your wife.”
“Mrs. Twain, you should be ashamed of yourself. Doesn’t your husband object to your affairs?”
“Call me Debbie. And no, that limp loser is too busy fighting a forever feud with that holier-than-thou Big Guy to notice my doings and my NEEDS. Shoot, and the sausages on the men that come in here just aren’t big enough, if you know what I mean.”
Debbie leered at Joe’s burgeoning crotch. “But man, ain’t you history’s best hung Lutheran.” Joe blushed. She stared again at his groin. “Man, I’ve worked this job 900 days waiting for you to come along, ever since I met your wife at Chez Episcopalian Beauty Parlor.” Debbie licked her lips. “But your wife didn’t say you were such a hottie.”
She panted and gestured for Joe to come hither. Joe thanked God for the Swedish heritage enabling him to stand firm against offers of fun. He placed his right hand over his heart. “I shall never eat enslaving mushrooms, no way. I shall never dally with you, nor shall I ever, ever leave my wife while I am in my right mind and blood flows through this body.”
The evil temptress laughed. “Fine, then you’ll continue to get new minds and new bodies until you give in.” 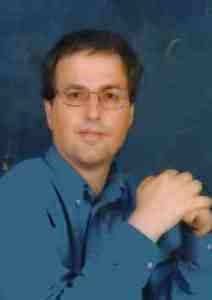 Paul De Lancey writes in multiple genres: adventure, westerns, morality, time travel, thriller, and culinary, all spiced with zaniness. He is a frequent contributor to HumorOutcasts. His novels Do Lutheran Hunks Eat Mushrooms?, Beneficial Murders, We’re French and You’re Not and The Fur West  and his cookbook Eat Me: 169 Fun Recipes From All Over the World have won acclaim from award-winning authors.

Paul is also the writer of hilarious articles and somewhat drier ones in Economics. Dr. De Lancey obtained his Doctorate in Economics from the University of Wisconsin. His thesis, “Official Reserve Management and Forecasts of Official Reserves,” disappears from bookstore shelves so quickly that most would-be purchasers can never find it in stock.

Paul, known to his friends as Paul, was the proud co-host of the online literary events Bump Off Your Enemies, The Darwin Murders, and Tasteful Murders. He also co-collected, co-edited, and co-published the e-book anthologies resulting from these events. Perhaps Mr. De Lancey will someday  become a literary giant without having to die for the title.

The humorist is a direct descendant of the great French Emperor Napoleon. Actually, that explains a lot of things. Paul ran for President of the United States in 2012! Woo hoo! On the Bacon & Chocolate ticket.  Estimates of Bacon & Chocolate’s share of the votes range from 3 to 1.5% of the total. El Candidato also lost a contentious campaign to be El Presidente of Venezuela. In late 2013, Chef Paul participated in the International Bento Competition. The great statesman is again running for president, this time under HumorOutcasts’ sponsorship. Contact Paul before he gets elected to get that ambassadorship to Tahiti you’ve always wanted.

Mr. De Lancey makes his home, with his wonderful family, in Poway, California. He divides his time between being awake and asleep.

This book is available at amazon.com.

One thought on “Spotlight on Paul R. De Lancey – Author of “Do Lutheran Hunks Eat Mushrooms?””