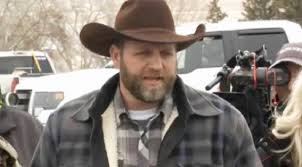 It’s time to start thinking about our next federal land occupation. I’ve pulled together some possible dates and sites and would like your feedback. I’ve arranged the dates for our anti-federal government rally so that no one misses getting their Social Security or military pension checks.

Larry mentioned that he’d really like to avoid freezing his butt off again. He’s urging me to pick a place with a hotel, so I’m leaning toward either Yosemite or Yellowstone. They’ve got big hotels with restaurants and, more importantly, a lot of restrooms. We don’t want to go there again.

Many of you are still raw about the fact that I picked winter for the Oregon refuge occupation. My bad – Dad said it was supposed to be an Indian summer. Live and learn. If we did Yosemite in the summer it’d be warmer and we’d have a bigger impact. Many of you are angry that most people stopped paying attention to us in Oregon apart from some jokers on Twitter and a handful of humor writers. That’s why I’m leaning toward Yosemite in July. Preventing tourist families from getting to watch Old Faithful blow would definitely keep the eyeballs glued to our cause.

Ray called me the other day and pointed out the need to plan better this time. I agree. Nobody will ever forget Bob screaming “If I have to eat one more fucking Slim Jim for breakfast I’m gonna shoot someone!!!!”

What else? Oh yeah, about Ricky. He is not welcome next time. Dad and I were not amused when Ricky told a reporter that we’re related to the Bundys on that show Married With Children.

More importantly, we need to agree on a single message. We were all over the map last time. This comment that I copied from a website pretty much says it all: 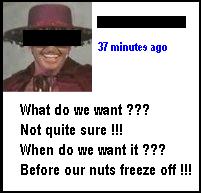 But I think I’ve got a good potential theme. Check out these stats:

We only get a 93% discount from the Feds? That’s total bullshit! Oppression at its worst! So I propose that our theme next time be “Tranny.”

One last thing. Let’s all remember to keep the racism and islamophobia in check. Remember how things were going really well in Nevada until Dad said this about black people:

“They abort their young children, they put their young men in jail, because they never learned how to pick cotton.”

Not good. Even Sean Hannity had to bail after that. If we want traction, we need to keep the pinstripe patriots at Fox on our side. They’re pretty much the only network that will take us seriously.

Get back to me soon,

One thought on “Planning For Next Time”