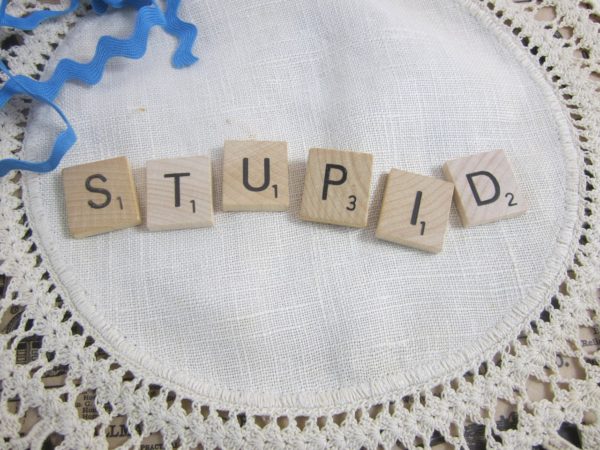 For the longest time, I didn’t know what SMH stood for. Then I learned it’s the acronym for “shaking my head” — something I’ve been doing so much lately I risk getting whiplash. Because…stupidity.

I’ll be the first to admit I do or say dumb things sometimes (like recently showing up a week early for a lunch date with a friend. And a few weeks later, totally blowing off lunch with another friend because I forgot to write it down.).

Now, I really don’t mean to sound judgy (well, maybe I do). But seriously, have you ever watched an episode of “America’s Funniest Home Videos?” Or Jimmy Fallon’s “man on the street” interviews? Or perused the annual Darwin Awards? And don’t even get me started on the 1 in 3 Americans recently polled who don’t know Obamacare and the Affordable Care Act are the same thing.

From these examples, it’s all too easy to conclude that our country’s gene pool has become seriously diluted. Here are a few more reasons why:

Ain’t that a pisser!

The Associated Press reported in July 2016 that police evacuated an Amherst, Massachusetts apartment complex because of a strong smell caused by a man cooking urine. The building manager received a complaint of a “pungent odor” coming from one unit and found some unmarked glass containers containing number one. The pee-burning man wasn’t criminally charged—I guess because stupidity isn’t a crime.

And in the burning bridges department…

A few years ago, some new folks moved into our covenant-protected neighborhood and started installing an in-ground pool. When informed the pool encroached into the side setback, they continued construction despite warnings they’d be violating the covenants and risk having a lien imposed. When the community’s board actually imposed the lien, these homeowners not only turned around and sued the association—their neighbors—but also lamented that no one wanted to befriend them. Um, seriously? P.S. They had to move the pool.

Man runs himself over en route home from strip club

A 28-year-old Florida man fell out of his truck while driving home from a strip club, ran over his own leg, then ran away. His truck kept running, too, rolling into a nearby house and injuring a 58-year-old woman inside, according to the Orlando Sentinel. The man was later found and arrested since he conveniently left an ID in the truck. Shoulda buckled up, dude.

Didn’t quite grasp the concept

Shortly after we moved to Maine—and into a house surrounded by woods—Hubs went out to buy a blaze orange hat to wear while working in the yard during deer-hunting season. While he was in the checkout line at a local retailer, two young women behind him remarked on his brightly colored hat, and Hubs explained its purpose as protection during hunting season. One of the young women asked, “But how does the hat keep the deer away?” You can’t make this stuff up.

Sure, these anecdotes are amusing (sort of), but they underscore a much greater problem, which Maine author Alan Caron described in a recent article in the Portland Press Herald entitled “America is suffering from a dangerous knowledge deficit.”

In his piece, Caron contends that our country is drowning in a rising tide of stupidity, and cites some startling statistics as proof, including:

Caron also cautions us to not confuse stupidity with ignorance or lack of education. “Stupid is different,” he writes. “To win a degree in stupid, you have to willfully reject facts in favor of superstitions, myths, fears and conspiracy theories. And then get all your news from fake or biased news sites targeted at the stupid.” And, I might add, believe in alternative facts.

So what’s the answer? Short of hitting everyone with a smart stick, here are a few strategies we can undertake:

And follow the advice of Dell Technologies founder Michael Dell: “Try never to be the smartest person in the room. And if you are, I suggest you invite smarter people—or find a different room.”

If stupidity
were a crime, too many folks
would be serving life.

What do you think about the state of the union’s IQ? Got some funny stories to tell? Some strategies to help us be smarter? Please share…

2 thoughts on “You can’t teach stupid”