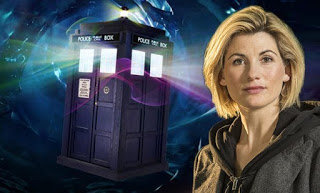 We’ll get to the good Doctor–whose name is not Who–in a moment. This is set against the bigger question of whether it’s okay to change the race or gender of an established fictional character, always (so far) to a person of color and/or womanliness. In general, if it’s another case of political correctness gone rampant (I call it Political Over-Correctness) I’m not a fan.

“The next James Bond needs to be black!”
“Why?”
“So we can have a black James Bond!”
“Okay. Or, you could just create a black secret agent from scratch.”
“Yeah, but … then he wouldn’t be James Bond!”

Honestly, it’s not something I care enough about to argue over, which sets me apart from most people who care at all. I wonder if they grumble about me not being up for a fight, as I do about their pointless battles? If the TV and movie industry disappeared from the face of the earth right now–which isn’t the worst idea ever–I’d just go back to reading books. Nobody cares about the race of a novel character, unless the novel’s about race.

James Bond is an interesting case when it comes to gender and race swapping, because the franchise has already done it–just not with 007 himself. Bond’s CIA buddy Felix Leiter turned from white to black–twice, if you include 1983’s Never Say Never Again. The famous Moneypenny suddenly got the deepest tan ever, while Bond’s boss M became a female … although it should be noted that M is a title, rather than an individual.

Complain all you want (it’s not an invitation!), but for me when it does work, it works spectacularly. Starbuck from Battlestar Galactica was just as much fun and kick-ass as a woman in the reboot, for instance. From the time I was old enough to read comics I knew Nick Fury as a white guy, fighting his way across Europe in World War II. Now I can’t imagine him looking like anyone but Samuel L. Jackson.

Which brings us back to Doctor Who, who Samuel L. Jackson could totally play if he wanted to. Who’s going to tell him no?

On the question of changing a character’s looks just for the sake of changing them, the Doctor is a special case. Sometimes the actor playing a character is changed without explanation, as with the James Bond series. (Wait–who’s this new Darrin on Bewitched?) Sometimes it’s a reboot, as with Battlestar Galactica, and thus not really the same character. But Doctor Who …

He may be history’s most literal case of split personality.

The original Doctor Who, back in 1963, was an old guy; a grandfatherly type, on a show designed as a fun way to teach kids history. (He’s a Time Lord, you see.) But the actor began to have health problems, and it was soon apparent he couldn’t continue in the roll. It seemed Doctor Who was doomed to retirement.

But wait, the writers said. The guy (ahem–person) is an alien. Suppose this particular species of aliens, when facing death, could cheat their way out by transforming into a new body? Regenerate into, say … another actor’s body?

That was twelve Doctor’s ago. More, really, but we don’t have time to go into that complication. In fact, the Doctor has already been a woman, played (very briefly) by Joanna Lumley in a 1999 charity episode.

So there’s no story reason why the Doctor can’t be female. One of his main antagonists, also a Time Lord, already regenerated from male to female. The show has had many strong female and minority characters in the past, and the Doctor’s most recent companion was a black lesbian. (Is lesbian still a permitted word? I don’t care.)

So that’s where we are in the Doctor’s complicated half century. In the Christmas episode the current Doctor is going to meet the first Doctor–that kind of thing happens, from time to time–and then presumably regenerate into someone who looks a lot like the actress Jodie Whittaker. If they did it to freshen up the show and keep things interesting … well, why not? I’m not sure it’s any more of a shock to me than when uber-young looking Matt Smith regenerated into still another grandfatherly type.

I wasn’t thrilled back then (“my” Doctor is David Tennant), but I came to like Peter Capaldi’s version. That’s why I don’t understand the so-called fans who are closing the doors of the TARDIS and going home. I know it’s not always mysogeny, as some narrow minded people claim. After all, I wasn’t thrilled, and my wife won’t let me be mysogenistic. She won’t even define the word for me.

Honestly, I suspect it’s just resistance to change in general, and I get that. Contrary to what some will tell you, sometimes change is bad. But you won’t even give the new Doctor a chance? Why not? With that attitude, the show would never have made it out of the sixties.

And we’d have missed a lot of fun.