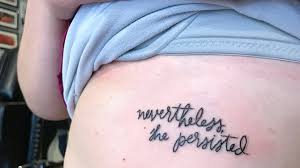 The title of the overdue book returned to a public library in San Francisco 100 years after it had been checked out? Forty Minutes Late.
(Readers Digest, 04/17)

In 1999, Kathy McKeon, Jackie Kennedy’s former assistant, went to a Halloween party dressed in a Marge Simpson costume she’d made from one of the former first lady’s hand-me-down nightgowns. She  won the prize for Best Costume.
(People, 05/08/17)

Elizabeth Warren gets a kick out of people showing her their NEVERTHELESS, SHE PERSISTED tattoos.
(Time, 06/05/17)

If you’re born in the fall (September, October or November) you have a better chance of living an extra-long life.
(Reader’s Digest, 05/17)

A study found that when choir members sang in unison, their heart rates slowed down and eventually synchronized.
(Reader’s Digest, 05/17)

Roz Warren is the author of JUST ANOTHER DAY AT YOUR LOCAL PUBLIC LIBRARY: AN INSIDER’S TALES OF LIBRARY LIFE.)

2 thoughts on “JACKIE KENNEDY, MARGE SIMPSON & LONGEVITY: WHAT I LEARNED FROM MAGAZINES THIS WEEK”