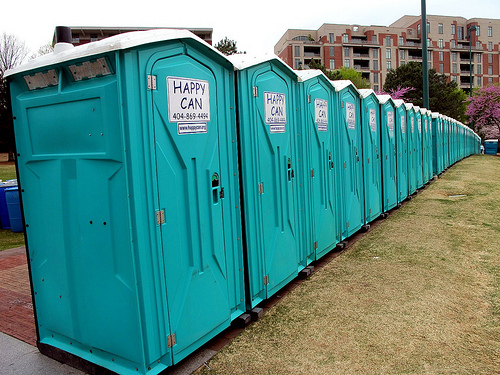 Picture it:  January 21, 2017. Washington, D.C.  More than a half-million women, men and children came together to take a political stance for equality.  A half-million people with the majority being women and about 50 Portable Pottys. You do the math. Okay, it might have been more than 50, but when you are in a crowd of so many full bladders, your judgment is not as clear as a mountain lake—no, it is as murky as a muddy puddle. I guess I should stay away from the water similes or metaphors or whatever, but you get my point. In all honesty, there could have been 10,000 pottys and it would not have been enough.

It’s not that women were surprised. We all knew the challenges before us.  Some women did take precautions and wore those special undergarments; some had catheter devices; I took the dehydration route. Science says (real science–not Trump science) that I had about 48 hours before lack of water would prove fatal. I went with the odds.

However, by 2:30 PM, (remember, we had been on the go–or rather not on the go since 5 AM)  those in my group needed to find relief desperately. In one of the metro stations, which also housed a food court (double plus in my book), there were bathrooms with the expected long and winding lines. A woman in a uniform (not sure if she was a police officer or an undercover angel from God) said to me these magical words,

“There is a secret bathroom downstairs. Take the elevator to the ground level and follow the corridor.”  I looked at my fellow marchers, Cathy and Terri, and said,

We made our way to the old elevator and down to the basement floor. We followed the deserted hallway looking for any sign that a bathroom did indeed exist. As we turned a corner, a male police officer surfaced and he directed us to the magic bathroom.  Three women were coming out and they wore happy faces.  They explained that  there was one caveat, “Don’t let the door to the bathroom shut. It locks from the inside and if it shuts, no one else will be able to go.”

So, we created a makeshift doorstop from an empty toilet paper holder.  As we peered into the bathroom, we realized not only were there no lines, but there were four stalls—real stalls—with working toilets. And there were sinks with soap and paper towels too. There were even mirrors.  We did what we needed to do and then took pictures so we could prove to other women that we were not delusional.

We made it back to the elevator and up to the food court level. We were determined to tell our sisters in the lines that there was a secret bathroom, but they didn’t believe us. They glared at us, so sure we were conspiring to pull them out of the line and take their place or perhaps some thought we had far more sinister goals-maybe to lure them to the basement level so that we could kidnap them and sell them into the sex trade.  That was my theory on their hesitancy.  I watch too much ID Channel.  Anyway, we were not victorious. Very few of the women left the lines. Obviously, we can march side-by-side for women’s rights, but our trust dies when it comes to available bathroom stalls.  Hey, I get it.  I’ve been in that line on many occasions trying to keep my bladder in check. It’s a complicated and scary feat – you are only one sneeze or cough away from disaster.

To the ones who did follow behind us, thank you for spreading the word too. We might not have saved every bladder, but we saved some. And for that we should be proud and grateful.

5 thoughts on “The Secret Bathroom”