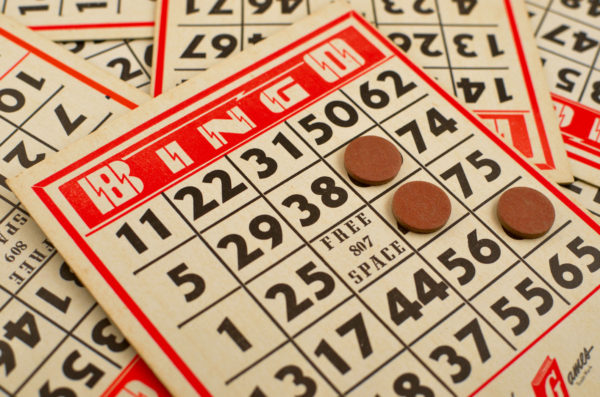 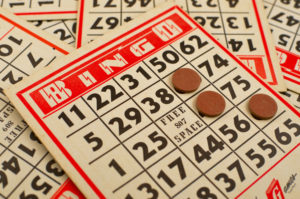 I have absolutely no idea what possessed me to volunteer calling Bingo again at a senior retirement community.  I had been volunteering here every two weeks for most of the summer.  Yet, there I was again, asking myself,  “What am I doing here?” Ever look around, dazed and confused, wondering just how the heck you ended up somewhere doing something you find unbelievable?  Let me rephrase my question, “What am I doing here, loser?”

That was the question running through my mind as I called Bingo again with sixty of the meanest people I ever saw.

If I am ever going to go berserk in public, it will be at the aptly named Leisure Living. Now don’t get me wrong. I love older people. I used to hang out with my grandparents and friends when I was a kid. And hey, I’m no spring chicken, myself. I went to Florida and rode my grandmother’s gigantic tricycle around the well-manicured trailer park.  Their friends shook metal wind chimes at me as I rode by. (Gimme a break, I was eight.) Most of my career in healthcare involved working with those of a certain age, who are the largest customers of the business.

But the folks at Leisure Living, oh my, they don’t make me feel the concept of leisure.  I arrived 30 minutes early to set up. Everyone was waiting for me at round tables, with cards, beans, and lucky charms lined up in front of them.  Let me repeat this for the uninitiated to the octogenarians and their serious sport of Bingo.  All sixty people were there waiting for me and ready to go THIRTY MINUTES BEFORE THE SCHEDULED START TIME.

I set out today’s prizes and someone called to me, “What did you bring today?” Volunteer callers bring about 20 gifts from the dollar store for individual rounds and then a “grand prize,” a $10 gas card or McDonald’s card.

As I reviewed the prizes — a bird feeder, sugar free candy, hand lotion, nail clippers, work gloves, etc. — a group of women came up front to handle and inspect each item. There was much grumbling among the patrons.

“This is crap,” one said. “Can’t she get anything better than this?”

I couldn’t help myself, but I said to the woman, “Are you aware that I can hear you?” (I probably could have been a little less condescending. But the woman had failed to understand the concept of volunteer, meaning that I don’t have to be there, and I don’t have to bring prizes.)

She said, “I don’t care.”  Random Female Octogenarian # 1 put the “crap” back on the prize table, and returned to her seat.

Now it is ten minutes until two, but this event cannot start soon enough because that means it will be over sooner.  Something tells me I won’t be asked back.

At 2 p.m., I screw up my courage and say in my most positive voice, “Is everyone ready to play BINGO?”

I start and focus — hard — on getting it right. This is my fourth time at Leisure Living and I’m getting better. Or so I thought.

The group decides to play ten rounds of two games each and then a “cover-all” for a gift card. I explained that I only have one gift card, and if there is more than one winner, we’ll draw for the card.

The running dialogue in my head goes something like this, “Bee, Twenty Seven, Bee, Two Seven.”

“When is this going to be over?”

“Maybe I should be smiling more. Do I look like I’m not smiling? Calling Bingo is easy, I shouldn’t let them get to me?”

In the very first game, there’s a tie. What to do?

Someone shouts, “Let’s give each of them a prize, and then clear our boards, since there are two winners.”

I asked, “Is that okay with everyone?”

These folks are verbal. I think most of them shout out that they agree.

After the decision, I say into the mic, “Everyone clear cards.”

A man in the front asks me, “Why are we clearing our cards?”

“The group just decided to do that, since there were two winners in round one.”

Instead I say, “Mob rule” and move on.

It’s a good thing Leisure Living doesn’t have a Bell Tower or I might be scaling the walls.

The board where I place the balls after calling them has holes on different sides of the numbers. This is very confusing for me, as I’m terrible at sequencing. As a visual learner, I picture letters and numbers in my head in order to put balls in the correct hole. In the first ten minutes I drop a ball twice which confuses me from my task, and nets a number of evil stares from 120 eyes and comments from some of the 60 mouths.

“Get your act together, lady.”
“This isn’t ping pong, honey.” Honey? Well, at least maybe they like me a little.

“Cover-all” seems to last forever and will be the death of me. Every time I call that game, the bin is almost empty by the time “we have a winner.” You can feel the tension build in the room — these folks take this seriously. As the the wire bin empties, you could hear a pin drop in the room. All eyes are upon me.

In a perverse way, I sense my power.

“Speed ‘er up, why dontcha?” comes a call from the back.

Now I can’t help myself. I’m being a rebellious child, and I slow down more. I slow down until there is an awkward pause between each number. It’s the kind of pause that starts to make people feel uncomfortable. Am I starting to lose it? Am I a control freak?  Maybe I just want to go out in style, knowing this is my last visit.

Finally,  a winner.  I’ll be damned it was Random Female Octogenarian # 1.  She came up to get her gift card, looked at it, and said to me, totally without irony,  “This is crap.”

Did this make you laugh?  If so, take a minute and share on your social media.

If you like what you read, there’s more here Books by Amy Abbott.