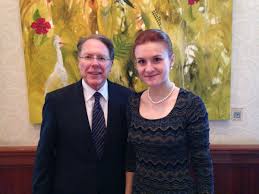 also happens to have a nice set of buns.

So she came to America to use her bootie,

to catch a live one who thought her a cutie.

She likened herself a Soviet NRA

and a modern day Calamity Jane.

A pistol packin’ mama the role she did play

for the infiltration she hoped to gain.

was an Eastern Bloc Amazon

said she “Mess with me I’ll bash ya!”

now even for a Russian that’s brazen.

She wanted to join in the band

her Kalashnikov ever near at hand

She even got to meet “The Man”.

Trump smiled and said “How grand!”

She got herself a Republican honey

But then she got caught by a discerning eye

who ratted her out as a Soviet spy.

So now she gets to sit in jail

being caught with her Red hands red-handed,

“Thrown under the bus!”she yelled rather candid.

There was a man who was made of gold

and gold was all he loved

for other things in life he was cold

for nature, people, society he was not moved.

When he had more wealth than anyone needed

he cast his eyes about for a new desire.

A call to media he then heeded

and became famous for who he would fire.

Soon even this no longer inspired

and his fans no longer satisfied

with politics he became en-fired,

and insisted he must be gratified.

Millions he invested to this pursuit

Only Presidency would satisfy his ego.

Ruthless he was, the old coot,

and accomplished his goal ergo.

Now as a trophy to his vanity

he rules the nation he says he wants to make great

and along with his watch dog Hannity

he hates, berates, ingrates, and infuriates.