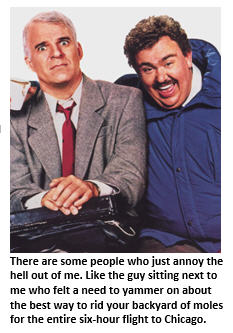 I consider myself relatively easy-going. It takes a lot to tick me off. And “hate?” Well, that’s just not a word in my vocabulary – unless used in the context of “I hate broccoli”, in which case, “hate” doesn’t begin to cover it. I honestly can’t think of anybody I hate (with the exception of my first-year college roommate, Lenny).

Life is just too short to go around hating others. But it’s not too short to point out those who annoy the hell out of me. I’ve plenty of time for that. Here’s a small sampling of people who really get under my skin…

Folks who walk through the door I’m holding for them without saying thank you. Seriously, dude, is it too difficult to utter two words?

People who send their annual Christmas card with no handwritten message – just a photo of three kids I’ve never met (how do I know they are even theirs?!), dressed in matching red sweaters, with a generic “Seasons Greetings from the Millers” embossed in Helvetica font. Could you possibly have put in any less effort to personalize your card?

My wife – but only when she asks, “What inning is it?” while I’m watching football. I swear, she will never figure out sports.

Neighbors obsessed with attaining the perfect lawn. I call them Lawn Nazis. Their grass is as smooth as a putting green, not a single weed or yellow patch in sight. Meanwhile, my yard features mole holes, a large convention of toadstools, and drooping flowers that gave up blooming back when Tiptoe Through the Tulips was popular. Now that I think of it, that song was really annoying, too.

People who have known their career path since age nine and now wake up every day passionate about going to work. Technically, I’ve just described my artist wife – so yes, I find her extremely annoying in this regard, too. I graduated from college, then business school, then law school, have been working for four decades, and I still don’t know what I want to be when I grow up. But lately I’ve been leaning towards Godiva chocolate taste tester or Frisbee golf caddie. 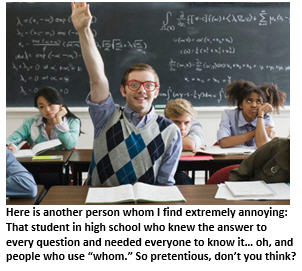 Those who think pit bulls make great family pets. You couldn’t adopt a schnauzer or a labradoodle? Really? (I can’t wait for the deluge of hate mail I’m going to receive for this pet peeve of mine).

My seventh-grade classmate Sydney Klepper, who, like a Pavlovian dog, upon hearing the class dismissal bell, would raise his hand and shout out, “Mr. Olcott, you forgot to give us any homework!” Man, I could have rung his bell! Shortly after this event, he entered the juvenile witness protection program and neither he nor his raised hand have been seen since.

People who can’t stop telling me about their incredibly amazing kids every chance they get. Don’t get me wrong. I love hearing about other people’s kids. Honest, I do. But when they go on for 30 minutes without pausing to take a breath, explaining in minute detail how their Jeremy is by all accounts the greatest child since Honest Abe Lincoln, starting quarterback on his high school football team, captain of the track team, starred in the high school play, scored in the top 0.5 percentile on his SAT scores, completed a semester of missionary work in Uganda, and just can’t decide whether to attend Harvard or Oxford, it does start to wear me out. Oh, don’t bother asking about my kids. Let’s focus on what’s important here.

Anybody who owns a Confederate flag and thinks they’re making a statement by displaying it on their front lawn. Trust me, you are.

Anyone who crosses the street against the light wearing ear buds or texting, completely indifferent to the near-death experience he just missed, thanks to my attentive driving.

Ned Furman, of Waukesha, Wisconsin – and he knows why.

Anyone who does not accept the irrefutable fact that the Beatles are the greatest rock and roll band that ever was or ever will be. Oh, sure, the Stones, U-2, Pink Floyd, and Led Zeppelin are all legitimate “honorable mentions,” but there is only one correct answer. Deal with it.

Teenagers who wear black EVERYTHING, have body piercings around every visible orifice, and sport black mascara, lipstick and fingernail polish, as proof to the world that they dare to be different – just like all their Goth friends who dress exactly the same. 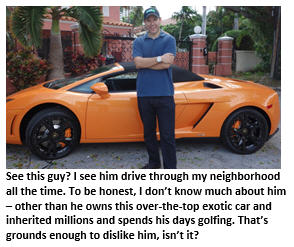 The dude at the gym with the six-pack abs who always flexes his muscles when he sees me – and has for the past five years. I know I’m not chiseled, like he is, but does he need to rub my face in it? Hey, at least I made it to the gym.

People who deliberately use a pretentious, indecipherable scribble for their signature, which consists of a ridiculously over-sized first letter followed by a straight line like the heart monitor reading of a patient in cardiac arrest, because they’re far too important to take the time needed to write their name legibly.

Donald Trump, every time I see his face or read one of his tweets. I don’t really think any explanation is necessary.

Hey, I’m just getting started. Please post a comment below and tell me what kind of people you find hugely annoying – unless your beef is with humor writers who complain too much about things that annoy them, in which case, no need to share. My wife has already lodged that complaint. She’s way ahead of you.