BOSTON.  Ten-year-old Timmy Kwiezscki has a dream–to become a uniformed police officer patrolling a beat–but it’s not clear he’ll ever realize it.  “The chances of out-living a case of Stage 3 Osgood-Schlatter’s Disease are zero,” says Dr. Norman Winkler at Boston Pediatric Hospital of the debilitating knee ailment whose victims are almost exclusively young boys.  “All we can do is try to make the next 60 or 70 years of his life bearable.”

When Timmy’s story came to the attention of the Dream Come True Foundation, a national charity that helps young children with chronic diseases get a taste of the boring adult lives that may be denied them, they sprang into action.  “Timmy’s was a perfect case for us,” says Executive Director Phil Walton.  “His mom was a little concerned, but the police promised they’d only stop for donuts once on the shift.”

And so the young crime-fighter found himself cruising Commonwealth Avenue with Officers Jim Hampy and Mike O’Dwyer last night, eager to see what life on the thin blue line that separates an orderly society from mayhem and chaos is like.

“You ready to bust somebody, Timmy?” Hampy says with a smile.

“Yeah!” the boy says as the car makes a right turn into the Allston-Brighton student ghetto.

“It can be a lot of fun, lemme tell ya,” O’Dwyer says.  “Especially if you get the right kind of perp.”

“What kind is that?” the boy asks, his eyes wide with anticipation.

“I dunno, I guess I’d have to say law students are the most fun,” Hampy says thoughtfully as he slows to cruising speed looking for loud parties.

“‘Cause they try to argue with you while you apply your nightstick to their heads,” O’Dwyer says.  “You’re literally taking grey matter away from them while they’re using it.”

A lively discussion follows as to which of the five local law schools produces the most obnoxious students, with Hampy making the case for Boston College, while O’Dwyer, a devout Catholic, argues for Boston University.  “I see your point,” he says to Hampy, “but you gotta remember most of those B.U. kids are from New York so they got a leg up on the others.” 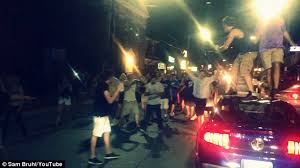 “I hate the Yankees,” Timmy says from the back seat, and O’Dwyer turns to give him a thumbs-up sign.  “Okay, little fella,” he says.  “Let’s see if we can get you a New Yawker.”

Hampy rolls down his window and, through the fall night air, hears the thump of white punk rap coming from a “triple-decker,” the three-story apartment buildings that make up much of Boston’s aging multi-family housing stock.  “No need to look any further,” he says as he stops the car and the three gendarmes get out to confront the partygoers.

O’Dwyer rings the doorbell of the first floor with Timmy and his partner by his side, and they are greeted by Evan Wilensky, a second-year student at B.U. Law from Scarsdale.

“I’m gonna have to ask you to turn it down, okay?” Hampy says, but Wilensky, who started drinking several hours earlier, objects.  “We’ve got a constitutional right to party,” he says boldly.  “It’s in the First Amendment.” 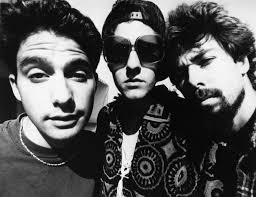 “I think yer thinkin’ of the Beastie Boys,” O’Dwyer says.  “We’re gonna come in and look around a bit, okay?”

“You can’t do that, it’s an unreasonable search and–ow!” Wilensky screams as Hampy strikes him on the head.  The student falls to the ground and O’Dwyer says “It’s time to bring in back-up!” as he hands his Taser to Timmy.  “Here ya go, buddy.  You get first crack at him.” 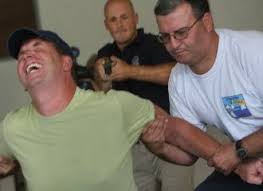 Timmy takes the weapon, steadies himself and, with his eyes closed, pulls the trigger, sending a jolt of electricity through the fallen scholar’s body that erases several semesters of crammed-in legal minutiae.  “Attaboy!” Hampy exclaims.  “Let’s get out of here before the ACLU shows up.”

The partygoers scatter as the three return to the squad car, and O’Dwyer checks in with his young apprentice.  “Did you like that?” he asks.

“You ready for some real police work, and not just post-adolescent baby-sitting?”

The cruiser heads into the inner-city neighborhood of Mattapan, a crime-ridden area with a primarily black population.  “Be on the lookout for suspicious activity,” O’Dwyer says to Timmy as his eyes scan the street.

The police car slows down outside a convenience store, where three young men are sipping drinks from paper bags in order to conceal their open consumption of alcohol in violation of a local ordinance.

“Eggplants,” Hampy says, using a derogatory term for blacks that he learned growing up in the goombah-rich Italian neighborhood in Newton, Mass. known as the “Lake District.”

“You wanna make the collar?” O’Dwyer says to Timmy.

“Yeah!” the boy says, and the three pile out of the car to confront the trio of clandestine liquor sippers. 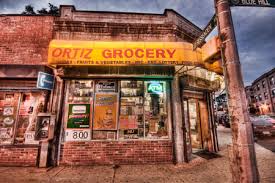 “Okay, youse three, up against the wall and spread ’em,” Hampy says, brandishing his night stick and rapping one of the young men on the leg to show he means business.

“You got nothin’ on us,” one says as he quickly discards his bag and bottle into an alley.

The young boy steps forward, surveys the scene, and pronounces confidently “You were loitering while eggplants!”

“Whuss he talkin’ about?” one of the suspects asks.

“You know kids,” Hampy says.  “It’s Sesame Street–gets ’em thinkin’ about good nutrition and stuff.  I’m gonna let you guys off with a warning but don’t let it happen again.”

The officers put their weapons back in the holsters and begin to backpedal towards the car, keeping the scene of the crime in front of them so they can react quickly to any sudden movement.

“Not this time, kiddo,” Hampy says.

“Darn it!” Timmy says with a disappointed tone.

“We’ll come back later after they’ve shot somebody,” O’Dwyer says.  “There’s plenty more action out there for us.”

The three get back in the car and head over to the Mission Hill district, the multi-racial neighborhood where a white man, Charles Stuart, shot his pregnant wife then tried to blame it on an unidentified black assailant.  “What are we lookin’ for now?” Timmy asks.

“You know,” Hampy begins, “because of budget cuts it’s hard to scrape by on a cop’s salary, so sometimes you got to be–what’s the word–entrepreneurial.”

“You got to grab all the cash . . . I mean opportunities you can,” Hampy says.

The squad car pulls to a stop in front of a non-descript brickfront store, where the windows are shuttered but a low hum of dance music can be heard.

“Is somebody having a party?” Timmy asks.

The two policemen escort the young boy to the door, tell him to knock and say “Police–open up!”

The boy’s voice is too soft to be heard over the din inside, so the two cops kick in the door.

“Hey–what the . . .” a Hispanic man dressed in black says as the three enter.

“You got a nice little place here,” Hampy says with mock sympathy as he surveys the unlicensed after-hours club scene before him.  “I’d hate for it to . . . you know . . . get shut down.”

The host looks the three of them up and down, suppresses an instinct of disgust at the prospect of paying graft, then reluctantly moves to the cash register and begins to count out bills.

“I think you’re forgetting someone,” O’Dwyer says, casting a downward glance at the junior member of the team.

“Oh, okay,” the club owner says, as he pulls a dollar from the till and hands it to Timmy.  “Here you are, little man.”

The boy’s eyes grow wide as he takes the dollar bill in his hands.  “Wow–thanks, mister!” he says with genuine appreciation.