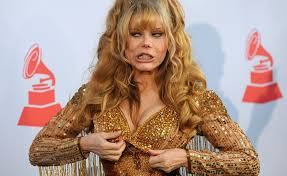 The entertainer still wants to spread joy, but now she is on a mission to prevent suicides.

I have come to Beverly Hills, Home of a Million Stars, to confer with my favorite flamenco guitarist, Maria Rosario Pilar Lorenza Emilia Eugenia Martinez Molina Baeza de la Osa Rasten–better known simply as “Charo.”  According to The New York Times–The “Grey Lady” of American Journalism–Charo has said that her time as a woman has ended, and that she has moved on to fight suicide.

I intend to take her one-woman crusade (Editor: I thought her time as a woman had ended?) and make it a one-man-one-woman crusade.  Yes, we may be small in numbers, but we will be great–just you wait!

Charo came to her latest enthusiasm the hard way; her husband became depressed after contracting a rare disease, and shot himself at the age of 78.  I, on the other hand, have been fascinated with suicide as a philosophical conundrum since I was a little boy.  At one time the penalty for attempted suicide was, in some jurisdictions, death.  As Mencken said, democracy is the theory that the people know what they want, and deserve to get it good and hard.

Charo’s life wasn’t an easy one even before the loss of her husband.  She and her sister Carmen were turned out of their childhood home in Spain, a sad state of affairs that drove her to vow–Scarlett O’Hara-like–never to be homeless again.  She has a name so long that she is often asked by policemen to move because it blocks traffic.  She made frequent appearances on both “The Love Boat” and “Fantasy Island.”  You want to pity her, but she’s so upbeat–she won’t let you. 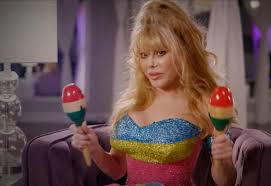 One maraca for each maraca.

She rode her trademark catchphrase “cuchi cuchi” to fame and now must endure witless New York Times “lifestyle” (or should I say “deathstyle”?) reporters who are so overwhelmed by her undiluted Charo-ness that they are reduced to sputtering bubblers of babble:  “Meeting her,” writes Times reporter Jolie Kerr, “I wanted to say her name right to her face as many times as I could, and clutch at her because she is Charo.  She has a way of wanting to make you call her Charo at every opportunity, like it’s an exclamation.  Charo!”

This, one reflects, is the smoldering state to which a supernova of Charo’s magnitude can reduce America’s Newspaper of Record.

I push the buzzer and that familiar Betty Boop-like voice comes over the intercom.  “Who ees thees?”

“It is I,” I say, using hyper-correct English to establish my bona fides with the woman whose time, according to The Times, is measured in major network prime-time specials, such as “Christmas at Pee Wee’s Playhouse.” 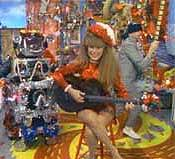 “Come in,” she says, and I do, finding myself in a world that is exactly as described in SundayStyles:  “Her breasts are everywhere,” quoth The Times; “she calls them maracas.”

“How do you like them?” she asks, and I confess to my long-standing love of maracas.  “I had a pair of maracas as a boy,” I say fondly, reminiscing about a gift from my Uncle Tommy in San Antonio.  “Do you know Jerome Green?” I ask. 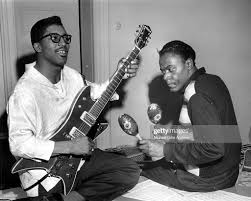 “He was Bo Diddley’s maracas man.”

“I have never heard of him.”

“Probably deserves the praise–or the blame, depending on your point of view–for what the kids call ‘hip-hop’ music today.”

“Yes, he and Bo traded insults on ‘Say Man,’ a spoken-word number that anticipated rap by three decades.”

“That is quite something.”

“That’s not all.  He’s also famous for his put-down of British blues-rock bands.”

“Yep.  When Bo toured England during the British Invasion years they went to a club and heard a white band playing one of Bo’s songs.  Bo turned to Jerome and asked ‘What do you think of these guys doing our material?’”

“Apparently.  But enough about maracas, let’s talk about . . . suicide.”

“It’s always been treated as a serious subject–Hamlet, Kierkegaard–until that New York Times profile,” I say to the woman whose career was launched when the King of the Cha-Cha, Xavier Cugat, hired her to replace Abbe Lane.  “So I don’t blame you.” 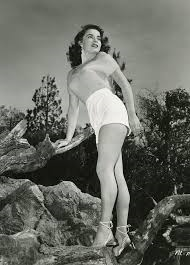 “That ees what is important about suicide, somebody else does it, I am not to blame.”

“The thing about any effort to reform the world,” I begin, drawing on my many years of experience pursuing hopeless causes, “is you must know who your enemies are.”

“I have enemies?” she asks, all wide-eyed incredulity.  “Me, whose maracas go ‘meow-meow-meow’?”

“Yes,” I say, leaning back thoughtfully and gazing off into the distance.  “In high school football, you take the field and your opponents are lined up opposite you–so you know what you’re up against.”

“With social causes, on the other hand, your adversaries may be hidden.”

“I’m not really sure–but no one would ever be up front about it and start a Pro-Suicide PAC or trade association, would they?”

“So we have to scout around for unseen cultural forces at work at subterranean levels.” 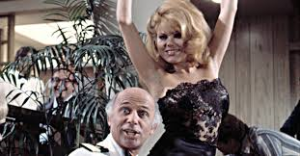 “They travel in submarines?”  It must be her Love Boat experience talking.

“No, beneath the surface.  Subtle, insidious messages that undermine the will to live.  Let’s put our thinking caps on.”

Like the playful little girl at heart that she is, she mimes the motion of tying a cap on her head.

“Anything occur to you?” I ask.

“Have you ever read my seminal essay, ‘Put Down That Poem Before You Kill Yourself‘?”

She laughs out loud.  “You are pulling my legs!”

“YES!  Anyway, a poem is beautiful, it cannot hurt you.”

“Au contraire,” I say, slipping into the high school French that got me straight B’s for two years running.  “Poets are more likely than practitioners of any other art form to commit suicide, and the poetry-industrial complex seems to encourage it by over-praising mediocre poets who take their own lives.” 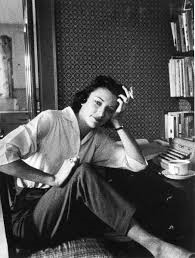 “Well, Sylvia Plath for one, Anne Sexton for another.  You know what Anne Sexton said when she heard Plath had committed suicide?”

She is, uncharacteristically, speechless.  “So . . . no more poems?”

“‘Fraid not, unless it’s going to be ‘Listen my children and you shall hear/of the midnight ride of Paul Revere’–that sort of thing.”

She is a bit glum and makes a pouty little moue with her lips.  “Well, at least we still have music to make us happy!”

“You may want to hold off on that one as well.”

“Wikipedia–it is not even a real encyclopedia, like you can ride to the beach!”

“The entry for ‘Songs about suicide’ is two hundred and one pages long.”

“Yep.  Some paint a rosy picture of self-murder, such as ‘Suicide is Painless.’”

“Sure.  Why else would The New York Times cover it in the SundayStyles section, like it’s a trendy restaurant in the Hamptons, or some dingbat entertainer’s new line of clothing.”

This, finally, gives her enough pause to stop the constant flow of chatter that is the ‘cuchi-cuchi’ lady’s most endearing quality.  “Well, it is comforting to know my husband died without pain,” she says.

“Still, when I get to heaven, I will tell him ‘Perhaps I should not have made such beautiful music for you, the man down there told me it is a leading cause of suicide.”

“Yes–where else would he go?”

“Uh, actually, you know the Roman Catholic Church is the last holdout on suicide.”

“They say if you commit suicide you go straight to hell, do not pass Purgatory, do not collect $200.”

2 thoughts on “Me and Charo Decide to Tackle Suicide”