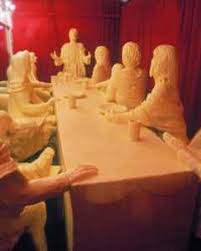 It has been several years since Norma Lyon, the pre-eminent practitioner of a uniquely American art form–butter sculpture–died, and the deep impact of her demise becomes more clear with each passing day.

Lyon’s death was noted in The New York Times and on the front page of The Wall Street Journal.  She had appeared on the Today and the Tonight Shows, Late Night With David Letterman, and To Tell the Truth, among other nationally televised programs.  She was the face of butter sculpture in America–nay, the world.  She was the Leonardo da Vinci of butter sculpture, and had in fact imitated that asexual gay genius–a precursor of Andy Warhol–by crafting her own dairy version of The Last Supper in 1999.

I was introduced to butter sculpture as a boy under the grandstands of the Missouri State Fair.  As with the Empire State Building and the Eiffel Tower, you probably know the building by sight even if you’ve never been there, for outside there hung what were for a time the World’s Largest Pair of Blue Jeans, until jeannie-come-latelies in Peru and Croatia kneed their way to the front of the pack in the humongous denim pants race. 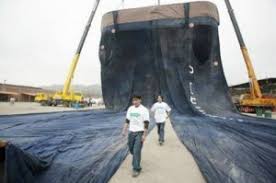 Walk under the crotch to reach butter sculpture exhibit.

Missouri’s State Fair is no slouch in the butter sculpture department.  La Lyon didn’t carve Iowa’s official Butter Cow until 1960, at which point butter sculpture aficionados in my little hometown were already sophisticated critics of the genre. Would we have been satisfied with a humble sculpture of a cow in 1960?  Puh-lease!  Would Parisians of the Impressionist era swoon over a big-eyed kid picture? 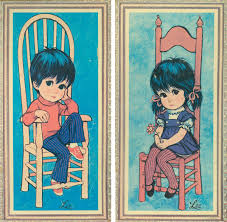 Butter cows were standard fare in the dawn of butter sculpture, but by the early sixties Missouri’s cholesterol carvers had advanced to full farm families, seated around the dinner table, discussing best methods of crop rotation in order to achieve maximum sorghum yields. 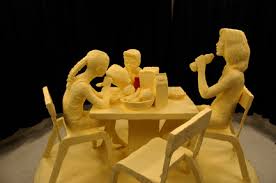 “If you don’t finish your butter, there’ll be no butter for dessert!”

Still, Lyon seen her opportunities and she took ‘em, in the words of Tammany Hall ward heel George Washington Plunkitt.  When other sculptors were working in flimsy, insubstantial materials such as stone, she got her hands wet first with ice, then with butter.

Sculpture is one of those art forms that, like poetry, seems to contradict our most cherished notions of our superiority over past ages.  Take a look at Michelangelo’s Pieta.(Best US viewing opportunity, 1964 New York World’s Fair–hurry before it closes!)  Now compare that masterwork to one of the many tributes to jocks that are going up outside stadia these days and tell me–if you dare–that we’ve made progress since the 15th century. 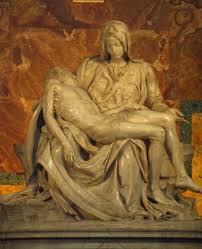 Which raises the question–in the wake of Lyon’s death, who is the pre-eminent butter sculptor of our time?  Not an easy call, but here are a few of the front runners: 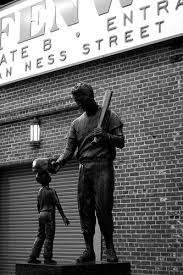 Velma Jean Ritter, Keokuk, Iowa. Long obscured by Lyon’s imposing shadow, Velma Jean is ready to move out into the sunlight of the world of butter sculpture.  Figuratively, of course; she has to stay in the walk-in cooler to do her best work or else her medium melts.  Ritter’s tour de force is a margarine-based version of Michelangelo’s David, complete with Ritz Cracker genital cover. 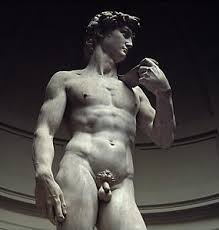 “Hey–wrap a towel around yourself, fer Christ sake!”

Wanda Goetzkee, Gumbo, Missouri. Wanda’s work draws comparisons to modern masters such as Alexander Calder for her gravity-defying use of spray-on butter substitutes to create light, airy confections that challenge our very conception of what a “stick of butter” means. 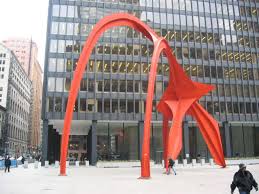 “I personally don’t know how she does it,” says Wim de Van Wenders, curator of the butter wing of the Minneapolis Museum of Dairy Arts.  “It recalls string cheese–not that I would know what that looks like.” 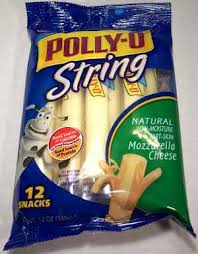 “We certainly wouldn’t serve that at a Silver Donors Wine & Cheese reception!”

Tony Joe Cutter, Hoxie, Arkansas. Warmer weather has held this young Turk back, but a recent relocation to Kearney, Nebraska during the summer months has produced a sea-change in his edgy, unnerving works–even though there’s no sea in Nebraska! 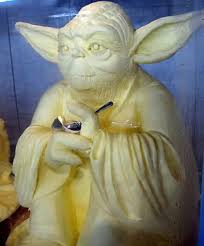 Butter Yoda:  “On cob on corn spread me you must!”

“I want to break out of the hidebound strictures that keep butter sculpture penned up with farm animals,” says Cutter.  “Where are the butter driveway gnomes, the butter Jabba the Hutt, the butter Buddy Holly?”

One thought on “Whither Butter Sculpture?”