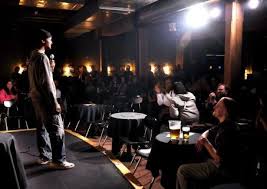 MC:  Ladies and Gentlemen, our next act comes to us from a two-week engagement at Mt. Zion Baptist Church in Otterville, Missouri.  He’s appeared on the Tonight Show, Conan O’Brien, and Oral Roberts Eternal Hour of Healing Power.  You’ll see his comedic talents on display in the upcoming Ten Commandments II, in which he plays a leper cured by faith.  So come on everybody, let’s give a great big First Calvary welcome tooooo–Jimmy . . . Ray . . . Mergen! 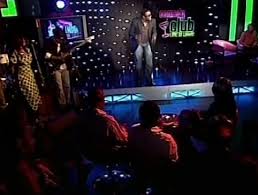 JRM:  You know, I just flew in from the Promised Land–and are my arms tired! 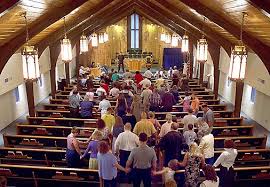 JRM:  Say–what is with snake-handling, anyway?  I know it says in Mark, 16: 17-18, that “They shall take up serpents; and if they drink any deadly thing, it shall not hurt them”–right?

JRM:  Still, what if the snake you pick is Jewish, and doesn’t read the Gospels?

JRM:  I’m kidding, of course.  We’re all part of one big tradition, we share Judeo-Christian values, right?  In fact, Jews goin’ back to Israel, that means we’re in the end times.

JRM:  So you better be ready.  I know I am.  I stocked up on hot pockets, Dinty Moore beef stew and toilet paper at Wal-Mart.

Heckler:  You should have bought some deodorant, ’cause you stink! 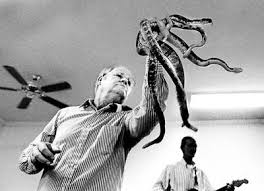 Heckler: You heard me.

JRM:  You know–it says in the Book of Proverbs, chapter 15, verse 1, that “A soft answer turneth away wrath; but grievous words stip up anger.”  So I’m just gonna turn the other cheek, like the Bible says . . . 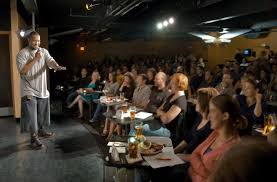 JRM:  Thanks, thanks everybody.  Anyway, do we have any secular humanists in the audience?

JRM:  Now, come on.  We’ve got to be tolerant of different belief systems.  What did Jesus say in the Sermon on the Mount?  Blessed are the ignorant–they’re so much fun to laugh at! 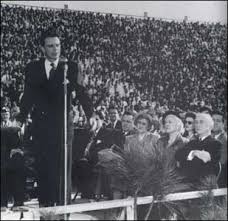 JRM:  Oooo–Mr. Know-it-All.  He’s absolutely sure there is no God.  Lemme ask ya this, pal.  If there is no God, shouldn’t it say “I don’t trust anybody” on the dollar bill?  (Applause)  Really.  I’ll bet you don’t turn down a dollar just because it says “In God We Trust” on it, do you?  Or do we have to print up special atheist money for you?

You know, I’ve got a precious little daughter, Jody Rae, just two years old (Applause), thank you, thanks–she’s the light of my life–after Our Lord Jesus Christ, of course.  Anyway, my wife and I decided it was time she started going to church so we took her last Sunday.  And she really liked it, I could tell.  Sure she fidgeted a little, but not that much.  Afterwards, I asked her what her favorite part was, and she said “I liked the song about the cross-eyed bear.” 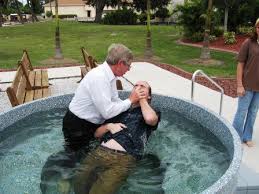 Well, I scratched my head, and I looked at my wife, and I asked her, do you know what she’s talking about?  And my wife said no, so we asked Jody Rae, we said “Sweetie, I don’t know what song you’re talking about.”  And Jody Rae said “You do too, daddy, you sang it too!”

And I’m thinkin’ and thinkin’ and finally I say, “Sweetie, there just warn’t no such song!”  And Jody Rae got real mad and said “I heard you, daddy.  You sang about Gladly, the Cross I’d Bear!”

Anyway, y’all have been great tonight.  I’ll be here all week, be sure and tip your elders and deacons!