As a boy, I was fascinated by tales of the necessity of certain mental and physical functions.  If a person didn’t dream at night, I had read, he or she would go mad the next day.  If we didn’t perspire, our bodies would overheat, cooking our innards like beef stew in a Crock Pot.  If we didn’t go to the bathroom, we’d–uh, maybe I’d better stop there.

Through the wonders of modern science, we know a great deal about the human body, somewhat less about the human mind, which is paradoxical, since the brain is part of the human body.  How can we know less about something that’s part of something bigger that we know more about?  It’s like a Mobius Strip, which has two sides, but when you go to count them, there’s only one.  It’s a riddle wrapped inside a slice of bacon along with a scallop.  Enigmatic–damned enigmatic. 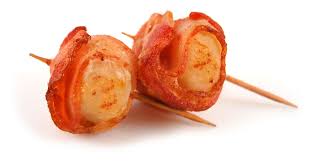 Mobius Strip, scallop wrapped in bacon:  Coincidence?  I think not.

The inspiration for this reverie was the question my doctor always asks at the end of my annual physical exam, which I get without fail once every three or four years.  “And how are you?” she inquires after she’s poked, probed, measured, tongue-depressed and looked in my ear with that little flashlight.  If you don’t know by now, I think to myself, who the hell does?

What she means is, how’s the ghost inside the machine?–to borrow Gilbert Ryle’s sarcastic description of Descartes’ mind-body dualism.

Ryle and Descartes:  After that one unfortunate crack, they never spoke again.  Of course, they’d never spoken before, either.

“So what are you writing these days?”

“Well, I’m working on that boxing book I told you about at my last visit.”

“Don’t rub it in,” I said, and rather sharply I might add.  “And then stupid little bits on the internet.”

“Really?” she asks, one eyebrow arching upwards.  “So, I could do a search and find something you wrote?”

“How much do you get paid for that?”

“Why the odd numbers?”

“I don’t know–it’s a PayPal thing.  I got $50–once–for writing a piece about Jonathan Winters.”

“The comedian who was sent to a mental hospital after he climbed up into the arms of a statute?”

“That’s him.  He was a real pioneer–he went crazy and didn’t even use drugs.”

“Well, you know, they’re just silly, stupid little things,” I gulped.  “For which I don’t get paid–anything.”

Johnson: “If somebody would hurry up and invent the internet, I wouldn’t have to pay for the morning paper.”

She looked at me with a wild surmise, as Keats said in On First Looking Into Chapman’s Homer.  I’d walked into the old Samuel Johnson trap; no man but a fool ever wrote anything but for money, which makes me . . .

My doctor is getting up there in years.  “Yes, but I never saw him.  He was a running joke in Mad Magazine during the ’60′s.”

“Hmm.”  I could see she was thinking about turning me into some kind of high-profile clinical paper, like Freud and the Wolfman.

“How do you feel about the Wolfman?” she asked tentatively.  I knew it!

“Well, of the three plastic model monster kits from my youth–Frankenstein, the Mummy and the Wolfman–I chose the Wolfman,” I had to admit.

“Poorly, just like all the other models I tried to build.”

“Um hmm.  What other kind of cra–things do you think about?”

“You mean the matinee idol from the ’40′s whose name used to pop up in Rocky and Bullwinkle cartoons?”

“Exactly!  Did you know that he was a punch line for Johnny Carson too?”

“I did not know that,” she said in a passable imitation of the former Tonight Show host.

“And that in a Dick Van Dyke Show episode, Rob Petree sees a flying saucer that makes the noise ‘Uhny Uftz’, which Rob misunderstands to be ‘Sonny Tufts.’”

“Interesting,” she said, although I could tell she was only interested in furthering her career.  I could just imagine her at the podium at the next General Convocation of the American Medical Association:  “I’m not a psychiatrist, but I play one in my practice.”

“How did the whole Sonny Tufts bit get started?” she asked after a moment of reflection.

“It may be an urban legend,” I began, “but the story is that he was selected to appear on a radio show after another, more-famous entertainer cancelled.”

“When the host looked at the cue card to announce the guests for the next show and saw that the more-famous person had cancelled, he read the words ‘Sonny Tufts?’ with ‘surprise and outrage’, according to Wikipedia.”

“Can’t go wrong with that source.”

“I know,” I said, calming down a bit after this ex tempore recitation of more facts about Sonny Tufts than a mentally-healthy grown man should know.  “Anyway, I’m afraid if I don’t let this stuff out–somewhere, somehow–my brain might explode or something.”

“I don’t know about that,” the doctor said as she scribbled something out on a piece of paper.  “But you may want to cut back on the egg salad.  Your cholesterol’s a little high.”