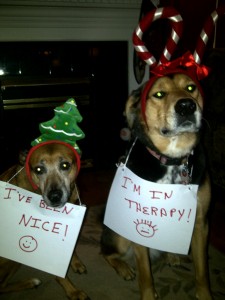 My dog Frankie has been suffering from Post Traumatic Stress Disorder.  Somewhere between age two and three, something put the fear of God into her and now we have to “unfear” her. Thanks to private therapy/training sessions, I have started to see my old fun-loving mutt come back.

I have to admit that when I heard the PTSD diagnosis from the vet, I was relieved because I thought something more sinister was afoot, or I guess the correct term would be apaw.  I thought that maybe she was possessed.

I know this idea sounds like a lot of doggie drama, but possession to me seemed plausible. One night after I started to notice Frankie’s odd behavior, I woke up from a sound slumber and could not get back to sleep.  So, I clicked the TV remote, thinking the television would relax me, and there I came upon this show about evil demons taking over house pets.  Naturally, I was interested.

It seems that there are demon doors everywhere – well, most of them start in Connecticut. I don’t know why, but Connecticut seems to have more demon portals per capita than any other state in the union. Maybe it’s their potholes and bad roads that provide the demons easy access to the surface or maybe demons just feel at home in New England. Whatever the reason, the demons come up through Connecticut and fan out throughout the country.  Perhaps, my Frankie was just in the wrong place at the wrong time and got bombarded by some errant demon making its way to Houston, Texas, which by the way, in my opinion is the place where all demons appear to settle down in the form of teleevangelists.

According to this show, the symptoms for pet possession ranged from snarling at the air to running and hiding for no apparent reason, to refusing to go into specific rooms in a house.  Frankie did all these things, and the snarling in the air caused my other dog to take offense and snarl back at her which is when real trouble would ensue.

So, fed up with the demon behavior, I sought out help. First, of course, I went to my psychic store and bought a sage smudge stick to cleanse the aura in my home.  It did calm things down a bit. I don’t know if it was the sage itself or the fact that sage smells a lot like pot and my dogs were stoned, but it did do a good job for a few short days. However, Frankie’s desire to hide and tremble resurfaced, so off to the vet we went. The vet recommended therapy and new training, and this is how Frankie, my husband and myself found ourselves in private family/dog – pet therapy/training, which in case anyone was wondering, is not covered by my HMO.

I have to say that our trainer and her mentor, who we went to see in New Jersey for a personal evaluation, have been wonderful. They both say we might not ever know what spooked Frankie, but we can get her confidence back. I told them about the pooch possession show in case they were open to suggestions, and they listened patiently and then asked if I was in therapy. Of course, they did say that dogs are very sensitive to beings not of this world, but they were pretty sure Frankie was just scared and not possessed.

Four lessons in and Frankie is doing so much better. She has a job now which has boosted her confidence. She wears a knapsack that holds water bottles or whatever we want it to hold when we go for a walk or travel. This job makes her thinks she is important. She is drilled in new commands as well which makes her feel safer and more in control. Is she perfect yet? Nah, and I don’t expect perfection, but the new training and positive reinforcement therapy has made me more relaxed too which means when stories about demons are on TV  in the wee hours of the night, I don’t look at my lab/shepherd and say, “Holy Crap, you’re possessed!”  No, I look at her and say, “You’re absolutely fine, but something is wrong with me because I’m paying for dog therapy!”

15 thoughts on “Even Dogs Need Therapy”